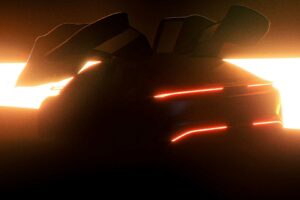 Aehra is a new EV automaker with headquarters in Milan, Italy, and a staff that includes former Lamborghini chief designer Filippo Perini. The company’s first product is an ultra-premium electric SUV that appears to have butterfly doors in front and a gullwing opening for the ones at the back. The vehicle’s full debut is in October, but these teaser renderings are an opportunity to see what’s coming.

The renderings show a vehicle that doesn’t look anything like a traditional SUV. The nose is short and angles downward. A curved recess occupies the tip of the front, and the headlights are on the outer edges of this area.

The rear has a steeply raked window that flows to a tail with a short overhang. The taillights consist of skinny red strips on the deck lid and beneath the bumper.

The company’s teaser offers no hints about the electric SUV’s powertrain or battery tech. For comparison, competitors like the EQS SUV in Europe are capable of 373 miles (600 kilometers) of range in the WLTP test. In the US, the Tesla Model X can go 348 miles (560 kilometers) on a charge, according to the EPA.

Aehra has lofty goals. It wants to compete against the EVs from Tesla, Lucid, BMW, Mercedes-Benz, and Porsche. The company plans to launch both its SUV and sedan in 2025. Prices for them would be between $160,000 and $180,000. China, Europe, the Gulf States, and North America would get the vehicles first. The automaker expects to deliver 15,000 to 25,000 units in the first 12 months of sales.

Following the SUV’s unveiling in October, Aehra will debut its sedan in February 2023.