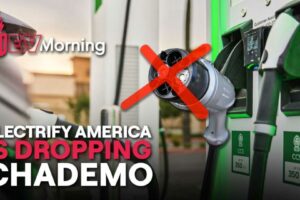 This move was expected, but it’s not appreciated by owners of CHAdeMo fast-charging EVs.

We’re back for another installment of EV Morning! You know what I’m about say, don’t you?…grab a cup of your morning dose and settle in for some news!

We mentioned the Future Factory and the OLA scooter on this show recently, so it seemed fitting to pass on the news of how bookings went when they opened up. In the space of 24 hours, the company secured 100,000 bookings of its yet-to-be-named scooter. It’s a hugely exciting time for India and what is planned to be the world’s biggest EV manufacturing plant. Good news for us all in this global push to electrification.

IONIQ 5 arrives in the UK

The IONIQ5 made a huge impact on the EV world when it was fully revealed a few months back. It really hit the mark with a lot of people. It had plenty of space, really good range, extremely fast charging, vehicle to load capability, and a whole host of other features.

And now it’s in the UK and readying for customer deliveries. Yes…the ‘Silver Ray’ has arrived with 3,900 IONIQ5s on board. The ship has traveled more than 12,000miles to get here. Landing in late July should mean that Hyundai’s first effort using the e-GMP platform will shoot up the charts for August and September sales. Best of luck to them!

We’re going to do a bit of battery news now and skip back over to China. Contemporary Amperex Technology Co. has announced its first generation of sodium-ion batteries. Now, this technology is not new and has offered some real challenges to scale since they were first mooted. But recent developments suggest that the energy density will improve to around 160Wh per kg.

The sodium-ion battery has the added bonus of being particularly resilient in cold weather climates, with a capacity retention of more than 90% at -20 degrees Celsius. They can hold a fast charge rate for longer and have excellent thermal stability. This type of battery doesn’t contain any cobalt or nickel, and at scale may prove to be very competitively priced.

We’re staying in China for a moment, where sales of their EV range have not gone according to plan. They had originally budgeted for sales of 80 to 100,000 across their range but at the halfway point in the year, had achieved just under 20,000. This is obviously disappointing for them, and even Herbert Diess himself has said they will need to change their approach. They are launching more retail sites as the year goes on, but only time will tell if a shift in strategy will be enough to convince the Chinese market that a VW EV is the way to go.

Time was, a few years back anyway, that the LEAF was arguably your best option if you wanted to go electric…unless you could afford a Model S or X of course! But the winds have changed for the Japanese manufacturer, and their market share is way way down in the US. Now Electrify America has announced that they will be phasing out installations of the plug from 2022, their third cycle of the project.

Our friends over at InsideEVs claim to have an Electrify America source that says only about 5% of electricity dispensed on their network is through the CHAdeMO socket. With the upcoming Ariya switching to CCS, the writing seems to be on the wall for the CHAdeMo socket outside of Japan. An exception though is the Californian state, where they will continue installing it.

And finally a quick note from the US stock exchange. Lucid CEO and CTO Peter Rawlinson rang the opening bell on the exchange on a day that saw the company raise $4.4 billion in funding. They will use the money to develop their Arizona site by adding 2.7m square feet, and perhaps add a line for the upcoming SUV.

It’s big money for a big factory making a car with big range. With manufacturing at the facility closing in on final checks, it can’t be long before the Lucid Air gets onto customers’ driveways.

So that’s it from us today folks! Another whirlwind through some of the stories you need to know about! But as always we want to hear from you, and get your thoughts on what we covered.

Are you a LEAF owner in the US outside of California?

What do you think of VW’s electric sales in China…just a blip that will correct or are they well wide of the mark in that market?

Let us know in the comments!