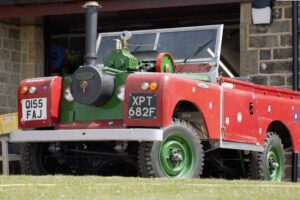 It does use quite a bit of coal, however.

Once upon a time, steam-powered cars were a thing. Admittedly, that time came and went a long time ago because it’s not exactly a practical method of propulsion. That doesn’t mean it’s not a fascinating way to power something, so when you have a small steam engine at your disposal, why not drop it into a classic Land Rover?

That’s exactly what Frank Rothwell decided to do. If that name sounds familiar, he raised no less than $1.5 million (£1.1 million) for Alzheimer’s research last year by rowing across the Atlantic Ocean solo … at age 70. He’s also sailed around the world, including the tricky Northwest Passage so you might say he’s very familiar with using water as a means of transportation.

That brings us to his crazy 1967 Land Rover and yes, it uses a legitimate steam engine. According to DriveTribe, the idea for the swap came to him after visiting a traction engine show where he saw some small steam engines. He ended up getting a small kit based on a 1910 Foden engine, put it together, then turned his attention to the old Land Rover. After some rough measurements and calculations to see if the swap was even possible, he found the dimensions and weights were actually pretty comparable. As such, the Frankensteam project began.

Admittedly, the Land Rover is a tad slower than it was. Per the video, top speed is around 12 mph and those riding in the open-cockpit off-roader do get a bit oily. Also, this Land Rover is no longer an off-roader – the mechanicals for the front differential were sacrificed in the swap but who cares? This is a freaking steam-powered Land Rover that runs on fire and water. A diesel-soaked rag and kindling wood stoke the boiler for coal stored behind the seats. At full throttle the steam Rover makes a satisfying chug. There’s even a legit steam horn to warn others of your arrival. Eventual arrival, but an arrival nonetheless.

It doesn’t make any sense, but that’s the glory of it. Combine a wild idea with some engineering and fabrication skills, and see where it goes. In this case, it led to a steam-powered Land Rover. Who knows where the next idea could lead to.