EPA Confirms Lucid Air Gets 520 Miles on a Charge 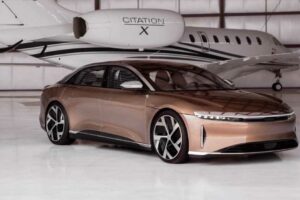 Lucid still hasn’t sold a single car but it does have a singularly impressive statistic: Its Lucid Air Dream Edition Range will go 520 miles on a charge, the company claims. Lucid says the EPA awarded the rating to its top-mileage model yesterday, adding that it’s the longest range figure ever awarded by the Federal agency, more than 100 miles farther than its closest competitor. 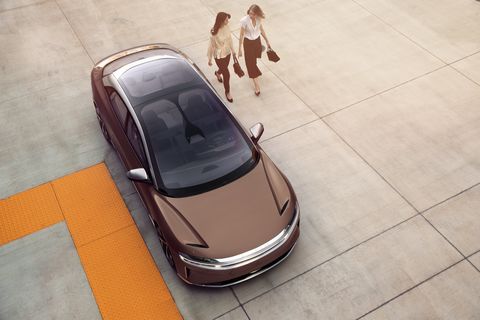 Lucid achieved the 520-mile figure using its own high-efficiency motors, technology, and battery designs, too.

Truth be told, the Lucid battery pack is 113 kWh, while the Tesla, the next-closest competitor, tops out at 100 kWh. So Lucid did install an oversized battery pack, depending on your definition of oversized. Keep that stat in mind when oohing and ahhing at the Lucid news. Nonetheless, having seen the Lucid powertrain and spoken at length with Mr. Rawlinson, there is a lot of impressive proprietary tech in the Lucids.

Lucid also points to what it called an independent range test it did with some other car magazine, the name of which escapes us, wherein Rawlinson and some other car writer drove two Lucids from LA to San Francisco and got over 500 miles of range out of both on that real-world drive. (Looking forward to verifying those numbers ourselves someday.)

The Dream Edition Range that got those great numbers is just one of three Airs said to be coming to market. Lucid says the EPA released range figures for those other models, too. 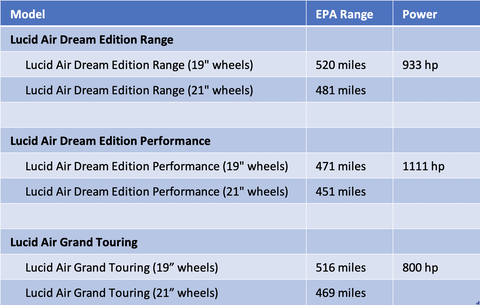 The Tesla Model S Long Range offers a range estimate of 405 miles from a 100-kWh battery with 670 hp on tap, while the Model S Plaid can go 396 miles while offering 1020 hp. Just a week ago, before the big Lucid range announcement, our colleagues at Car and Driver came up with a Top 10 list for electric cars based on the range they deliver. Just for comparison’s sake, here are the cars they listed:

While the Lucid numbers are impressive, there is still nary a Lucid in any customer driveway anywhere. Last we heard, deliveries were supposed to start by the end of this year, but we’re fast running out of year here. Nonetheless, we look forward to driving one sometime soon. For all 520 miles!