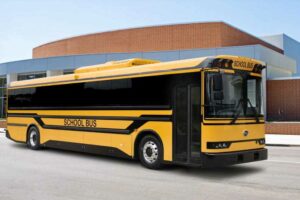 The Environmental Protection Agency (EPA) wants to make school buses in America electric or alternative-fuel with a new $5-billion plan. It’s called the Clean School Bus Rebate Program and a large part of the funds will go towards the purchase of pure-electric buses, although grants will be offered for compressed natural gas (CNG) and propane-burning vehicles that are kinder to the environment than diesel.

Combating climate change is an important stated goal of the Biden administration and this rebate program is one of the new measures announced whose collective role is to help the US become completely carbon-neutral by 2050.

These funding opportunities to replace older, heavily-polluting buses will result in healthier air for many of the 25 million American children who rely on school buses, many of whom live in overburdened and underserved communities. Today we take a major step toward a future where clean, zero-emissions school buses are the American standard.

On May 20, the EPA announced that the first $500-million will become available this summer, of which $250-million will be destined exclusively for electric school buses, while the other $250-million would go towards the aforementioned types of alternative-fuel vehicles. The rebates for new buses have quite a wide range, from $15,000 to $375,000, while for infrastructure projects (presumably chargers and their supporting networks) the range is smaller, from $13,000 to $20,000.

School districts can ask for up to 25 new buses per each application, but not all will be selected, since the grants will be awarded through a lottery system, although the EPA does say it will prioritize those applications that come from low-income and rural areas. The program will run for five years, starting in 2022 and ending in 2026 – this year they will be accepting applications from May 20 until August 19.