Home » Car Reviews » End of the ‘petrolhead’? Susie Dent on which petrol words will go extinct as EVs take over

End of the ‘petrolhead’? Susie Dent on which petrol words will go extinct as EVs take over 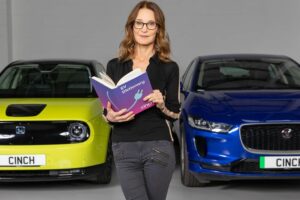 Dictionary Corner’s Susie Dent and cinch have come up with words and phrases which could disappear from our lexicon in the next 10 years. Susie Dent predicted that a number of incredibly common petrol-related words could become extinct by 2032 as electric cars take over.

This includes petrolhead, clutch and gears as well as phrases like “miles per gallon” and “take your foot off the gas”.

Speaking exclusively to Express.co.uk, she said: “What is certain is that the language of the electric car will become as familiar to us as the vocabulary of the ‘motor car’ did at the turn of the 20th century.

“Within a decade we will be happily comparing the capacity of the ‘froot’ on a new ‘BEV’ or ‘PHEV,’ or trying to keep a lid on our ‘range anxiety’.

“We will be regularly ‘juicing’ our battery – perhaps with just a ‘trickle’ – whilst hopefully avoiding all recriminations of ‘charge-hogging’ from our neighbours.

“All of this should be celebrated as part of the natural and constant evolution of our language.

“English will always twist and turn as we need it to, even as it holds onto the footprints of the past.”

The English language could also potentially lose popular idioms like “running on fumes” and “sucking diesel”.

This may all be replaced by some new electric car-related words which will only become more common.

She continued, saying: “The motor car or the motor carriage was beginning to become more popular and people were looking around for words to describe the technology.

“So many words came in like ‘accelerators, dashboards, speedometers’ but also we had to invent things to fill gaps.

“Where would you keep the car? They thought ‘we keep horses in a stable, we’ll call it a motor stable’.

The sale of new petrol and diesel cars will be outlawed in 2030, although second-hand sales will not be affected.

Susie also questioned what her favourite words were from the new batch of terms and predicted which may become more common.

She said: “I can’t quite make up my mind between ‘EVs and BEVs’ and ‘frunks and froots’.

“It is such a lovely example of how we experiment with words and creating new ones, and adding these lovely mash-ups.

“I will probably also add ‘range anxiety’ to the rest of my life and use it on a daily basis.

“I love this new vocabulary as it’s such a lovely snapshot of how language is going to change and how it’s in flux.”

The “frunk” or “froot” is the added space under the bonnet of the electric car to store belongings and blends “front trunk” or “front boot”.

Susie Dent’s petrol-related words that may become extinct by 2032: