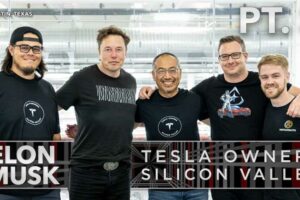 Even though at first glance the Tesla Cybertruck that was most recently spotted looks almost identical to the original prototype/concept shown in November of 2019, the electric truck has undergone some quite notable changes. However, no additional big changes are coming, according to Elon Musk, who announced in an interview that the Cybertruck’s design was “finally locked.”

The most notable changes we observed over the last year or so are the new windscreen wipers (no, they’re not lasers, but they may extend somehow, since in the latest photos they look too short for the massive windscreen), the addition of rear-wheel steering, the appearance of production spec side mirrors and the disappearance of physical door handles (which the concept ha).

We recently also got a peek inside the Cybertruck at what appeared to be the final design of the dashboard, which features a similar setup to the Tesla Model S and Model X, with a driver’s display complimenting the big central infotainment screen. The Cybertruck dash looks a lot like a Model S/X, but instead of rounded flowing shapes, Tesla made everything angular to match the exterior.

During the Tesla Owners Silicon Valley interview where he made many other announcements, Musk said Tesla’s focus is now to try to finally start building the truck. However, he points out that no matter how hard the automaker will try, it will not be able to make up for the lack of semiconductors that is now plaguing the industry.

This is why he estimates that even though the Cybertruck’s design won’t be changed any more, so they can start preparing and tooling up for production at the Texas Gigafactory, its actual start of production is still 12 months away. And that’s just Elon’s estimate right now, which doesn’t take into account any additional hitch they may still encounter on the road to production.