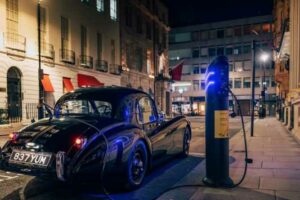 Classic electric car conversion is becoming more and more popular, as owners of older cars decide it’s time to remove the combustion engine and replace it with a more modern, electric powertrain that will future-proof their beloved vehicles against future law or tax changes and fuel availability issues.

Even Prince Harry had an electric Jaguar E-Type – the E-Type Zero – as a wedding car so they must be catching on. While the cost of converting a car to electric power is probably small change to royalty, it’s no small factor for the rest of us. There’s no getting away from the fact that the conversions are pretty costly at the moment especially for rarer classic cars.

Proponents of EV conversions say they get rid of the unreliable, smelly and noisy engines in old cars and let us appreciate their looks in reliable near-silence. Electric motors from even modest family cars like the Nissan Leaf provide more performance than old petrol engines could hope to manage, too.

Yet critics say that the procedure robs classic cars of part of their heritage and identity. The car was noisy, smelly and unreliable when new, and that’s part of what makes it fun to own one. Classic car fans are known for their love of tinkering with engines, too, though it’s clear that those kinds of owners simply won’t have this type of conversion done.

There’s also the question of whether a classic car is still the same classic car once its petrol-powered internals have been removed, and what such a move will do to its value. In the end, it’s largely a matter of personal taste, if you have the cash and an electric classic car appeals, why not?

If you can’t quite stretch to an off-the-peg classic electric car manufactured by one of the many companies that are producing limited runs of these models, there are other firms offering electric car conversion kits that will enable you to convert a whole range of internal combustion engined vehicles to run on electricity, at home.

It’s still not an undertaking for the faint-hearted or inexperienced but it’s an option you might want to explore. Basic kits can start from as little as £6,000 and we would certainly advise getting an experienced mechanic to to the work for you if you have any doubts or lack knowledge or working with high-voltage electrical systems. Once you’ve completed the conversion you have to follow the DVLA’s procedure for registering ‘radically altered vehicles’ before you can drive it on the road.

Lunaz is a firm based in Silverstone that produces high-end EV conversions. Its most famous model is a Jaguar XK120 producing 375bhp and 700Nm of torque thanks to its 80kWh battery pack and motor. It goes from 0-60mph in five seconds and has a range of 250 miles. Lunaz is also making a limited production run of the 1955-65 Bentley Continental Coupe and Drophead, the Mulliner Flying Spur and classic Rolls-Royces.

Prices for one of Lunaz’s cars start at £350,000, but despite this barrier to entry, Lunaz has seen a surge in demand of late, and is doubling its Silverstone workforce to meet this.

Electric Classic Cars is based in Newtown, Powys and converts all kinds of classic cars to electric power. Each project is looked at on a case-by-case basis, so their engineering is often bespoke, and involves some aspect of restoration to make sure the car is able to cope with a modern powertrain. Examples of cars converted by the company include a Porsche 911, Fiat 500, Volkswagen Beetle and even a DeLorean.

Zero EV is a company that doesn’t actually offer conversions at a workshop, but conversion kits that can convert Mazda MX-5s, Porsche 911s and Mercedes SLs to electric power. Prices range from  £15,000 to £65,000, and as an example, the 911 kit includes a motor from the www.autoexpress.co.uk/Tesla Model S – so performance is even better than the original petrol engine even in these sports cars.

Swindon Powertrain started out in combustion engines but now it has begun to offer an electric car powertrain that can be configured for use in various classic cars. It demonstrated the tech with the Swind E Classic Mini. This is an original Mini with electric power and best of all, you don’t need to modify the body for the conversion. This means an engine could be put back in at a later date if wanted.

The RBW MGB is a reinvention of one of Britain’s favourite classic sports cars. It has a range of about 160 miles and goes from 0-60mph in nine seconds. You can also add an extra battery to increase the range, and it’s available on both convertible and hard-top MGBs – though this isn’t really a conversion and is more of a brand-new car, since it’s based on new body shells with bespoke suspension and other parts.

The 2CEV is a new version of the classic Citroen 2CV by a company called The 2CV Shop based in Wiltshire. It’s designed to mimic the character of the original, but with modern, reliable and near-silent power. It has a range of around 65 miles and the cost of a conversion is about £16,400, or you can buy a ready-made car for £29,000.

Even the companies that originally produced some of our favourite classic cars now offer electric versions. Aston Martin has produced an electric DB6 and Jaguar has the E-Type Zero, made using parts from the brand’s I-Pace electric car. Even Volkswagen has officially endorsed a company called eClassics that is converting classic VW camper vans to electric power. You can bet that more car makers will see the opportunity that electric versions of their classics represent in terms of marketing and sales.

The principle of converting a classic car to run on electricity sees the engine and drivetrain replaced with a motor (or motors) and a battery pack, although approaches to how this is achieved vary. Some firms commission bespoke powertrains and ensure any conversion is fully reversible, allowing the engine and associated drivetrain to be reinstated if this is desired.

Converting a classic car to run on electricity is no simple task, however. Even a conventional engine swap is an involved process, and installing a completely different drivetrain takes this to another level. Motor mounts will need to be fabricated, strengthening materials will be required so the chassis can take the extra weight of the batteries, while suspension and other components need to be changed to take into account the altered handling characteristics brought about by the shift in weight that removing an engine and installing a battery pack causes.

Brakes, meanwhile, are likely to require uprating to facilitate regenerative braking and cope with the extra power and torque; auxiliary features such as lights, heating, air-conditioning and power steering, meanwhile, also need to be adapted so they draw power from the batteries, rather than the engine. And all this work needs to be carried out by someone who is confident in dealing with both involved engineering, and high-voltage electrical systems.

Have you ever considered an electric car conversion? Let us know in the comments…