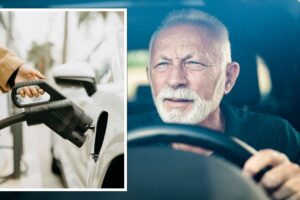 A new survey of 2,000 UK drivers found that an electric car is still not an option for many, with multiple reasons being given as to why. Nearly half of all drivers say they simply cannot afford to buy an electric car, with more than 50 percent of elderly drivers ruling EVs out.

Three-quarters of drivers don’t trust the Government to not make electric motoring more expensive in the future.

An overwhelming majority of drivers aged over 55 found that the Government would not take additional steps to make EVs affordable for all.

Similarly, almost eight in 10 people believe the Government grant is not enough to make them purchase an electric car.

More than 85 percent of over 55s agree with this statement, compared to 69 percent under 34s.

Currently, drivers can benefit from the Government’s plug-in grant which applies to 74 cars which have zero tailpipe CO2 emissions and can travel at least 70 miles without any emissions.

To be eligible for the grant, the car must have a recommended retail price of less than £32,000, including VAT and delivery fees.

The grant will pay for 35 percent of the purchase price for these vehicles, up to a maximum of £1,500.

Ben Wooltorton, COO of InsuretheGap, commented on the data, saying there was still a lot to do to get everyone on board with EVs.

He said: “We still have a mountain to climb in the UK to encourage large-scale adoption of electric vehicles.

“People seem put off by the cost, and sceptical about their financial advantage in the long term.

“We also know that the Government will need to recoup the loss of income when the current system of charging heavily polluting vehicles declines, but we don’t know yet how they plan to do this.

“It’s no surprise to hear, therefore, that electric car owners might fear that their card’s marked for additional expense in the future.”

A further three-quarters of drivers think it is unfair that people without a home electric charger could end up paying more at public charging points.

More than one in three fear that they could be priced out of driving altogether once the country moves to an electric future.

The sale of new petrol and diesel vehicles will be banned from 2030, with a similar ban affecting hybrid vehicles coming five years later.

This is part of the Government’s aim to become net zero by 2050.

While second-hand vehicles with an internal combustion engine will not be affected, some are worried that it could lead to rising costs for new cars.

A recent study found that electric cars and vans should be cheaper to make than petrol or diesel vehicles by 2027, with some achieving price parity from 2026.

It is expected that EVs will be cheaper to buy, on average, even before any available subsidies.