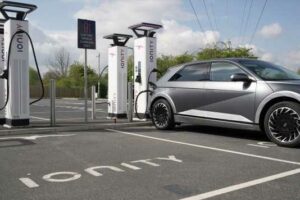 In the Government’s electric vehicle infrastructure strategy report, it forecast that there would be around 300,000 public chargepoints as a minimum in the UK by 2030. It suggested that there could potentially be double that number, despite admitting that the pace of rollout is too slow and that public charging is letting drivers down “too often”.

Joanne Robinson, Director of Lenders at Zuto, said the availability of charging points was essential to allow a seamless transition to an electric revolution.

She has warned that if the Government doesn’t invest in infrastructure and workforce soon, there could be serious consequences for the uptake of EVs.

Ms Robinson added: “Charging an EV needs to be quick, easy, and convenient so that it can fit around the consumer’s lifestyle.

“For some people, an EV may not tie in with their lifestyle due to obstacles with charger availability and range.

“If the Government continues its investment into improving the charging network and making it more accessible for everyone, this will instil more confidence in consumers and reduce ‘EV hesitancy’.”

She also called on players in the automotive industry to start preparing now, or they risk missing out on the “soon to be lucrative” second-hand EV market.

According to recently released data from the Department for Transport and Zap-Map, there was an eight percent increase in total charging infrastructure since July.

Around 17,179 of these were designated as “destination” chargers, this represents 50 percent of all charging devices.

In addition to this, more than 11,200 were designated as “on-street” chargers, representing 32 percent of all charging devices across the country.

There was an increase in total charging devices and those rated rapid or above in all regions of the UK, except the North East.

Experts have also called on the Government to implement measures which would allow for easier access to electric cars at an entry level.

Simon Bayley, Managing Director at SMF (Specialist Motor Finance), suggested that measures needed to be introduced to make it easier for drivers to access electric cars.

He said: “There needs to be more flexibility within the Consumer Credit Act (CCA) finance agreements to facilitate customers’ needs today.

“If it was easier for customers to change vehicles without having to settle and set up a new agreement (and incur all of those costs), then that would take a major barrier away from a customer who wasn’t 100 percent sure if an EV would work for them.

“They’d be more willing to try an EV out if they knew it was simple and cost-effective to switch back, if needed.”

Mr Bailey pointed to the cost of living crisis also having an impact, with drivers looking for environmentally friendly options that are also cost-effective to finance.

He highlighted the need for an improved charging infrastructure, which is cheap, reliable and quick.

These chargers should be in local areas, as he said most customers are renting and not homeowners, so they are less likely to have access to at-home charging.

The availability and affordability of these chargers are imperative to give drivers the confidence to switch to electric.