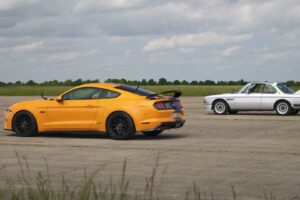 The Ford Mustang is a menace at the drag strip, but a new video from Carwow demonstrates how new tech in an old package can keep up. Its latest drag racing video pits a tuned Ford Mustang GT against an all-electric BMW 3.0 CSL replica.

The automaker’s naturally aspirated 5.0-liter V8 powers the Ford Mustang, but it’s been tuned by Clive Sutton. Instead of the usual 450 horsepower (335 kilowatts), the engine now makes 490 hp (365 kW). The torque remains unchanged at 390 pound-feet (530 Newton-meters). The extra power comes from a new intake, a new exhaust, and an updated ECU. Ford sends the car’s power to the rear wheels through a 10-speed automatic gearbox.

The BMW isn’t your typical classic. The car features a Tesla-sourced powertrain, with the 3.0 CSL replica packing a Tesla Large Drive Unit and a Tesla battery pack. The drive unit is capable of making around 450 hp and 295 lb-ft (400 Nm) of torque. However, Electric Classic Cars had to de-tune its output because the car would only fit certain-sized rear tires, so the car delivers about 300-350 hp (223-260 kW).

The BMW and Ford first compete in a pair of drag races. The BMW wins both, with the Mustang losing by half a car length in the second race. However, the BMW was able to keep the Mustang behind, crossing the finish line in 12.7 seconds. The Ford was right behind it with its 12.8-second time.

The two then compete in a pair of rolling races. The Mustang’s transmission remains in automatic mode for the first bout, and it’s unable to win. The BMW pulls away with the Mustang failing to reel it back in before the half-mile marker. The second rolling race with the Mustang’s gearbox in manual mode is different. The Ford’s gearbox quickly shifts to a lower gear, allowing the Mustang to pull ahead and win one drag race.

The final contest between the two is a brake test, and the Mustang wins this one by a lot. The BMW has a modern powertrain and upgraded brakes but lacks an anti-lock-brake system. Maybe that upgrade is coming later because we’d like to see a rematch.