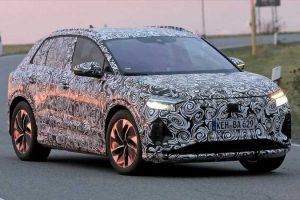 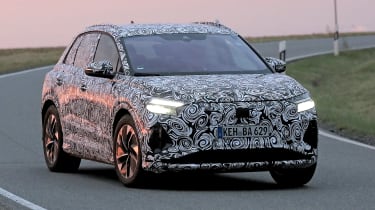 Our spy photographers have spotted the all-new, all-electric Audi Q4 e-tron undergoing testing for the first time. The finished car is expected to go on sale at the end of this year, as the fourth electric crossover in Audi’s stable, joining the full-size e-tron and e-tron Sportback, as well as the Chinese-market electric version of the Q2 compact crossover.

The Audi Q4 e-tron is based on the same MEB underpinnings as the Volkswagen ID.4 and will share the same range of drivetrains and battery packs, with the flagship variant sporting a 302bhp twin-motor, four-wheel-drive powertrain and an 82kWh battery.

Like the ID.4, the range-topping Q4 e-tron will have a 0–62mph time of six seconds, a top speed of 112mph and a maximum WLTP range of 280 miles,  which is a constant set of statistics shared across all of Volkswagen’s flagship MEB-based crossovers.

The MEB platform can also accommodate a range of lesser powertrains and battery packs, which could also make their way onto the Q4 e-tron. For example, the ID.4 will soon be available with a single 201bhp electric motor, powered by the same 82kWh battery pack, which will boost the crossover’s range to 311 miles.

In addition, Volkswagen will soon offer a series of entry-level and mid-range ID.3 hatchbacks, powered by batteries ranging between 45kWh and 77kWh in capacity. If Audi chooses to take these options for the Q4 e-tron, the cells would provide a theoretical driving range of between 200 and 300 miles.

The design of this Audi Q4 e-tron development mule remains faithful to the concept we saw at the 2019 Geneva Motor Show. It features a similar pair of LED headlamps, a kindred shoulder-line and near-identical grille, while the triangular vents on the front bumper have been transferred wholesale. 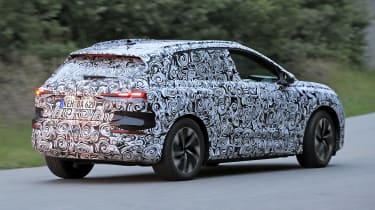 This mule’s roofline is a little less rakish than the concept’s, while the show car’s enormous 22-inch alloy wheels have been swapped for more reasonably sized alternatives. The rear lights haven’t changed much, though – underneath the masking there’s an almost identical full-width light bar, which should feature scrolling indicators on the flagship model.

We’re yet to see the cabin of the new Audi Q4 e-tron, but it should be broadly similar to that of the Volkswagen ID.4. As such, the dashboard will likely feature a small digital gauge cluster, a row of capacitive heater controls and a new 12.3-inch infotainment system which will be angled slightly towards the driver.

The concept’s quirky hexagonal steering wheel will be ditched for the production variant – while the show car’s four-seat layout will be swapped for a more practical five-seat arrangement. Like the ID.4, buyers will also be offered a range of premium toys, such as a customisable ambient lighting system, massaging seats and a panoramic sunroof.

When the Audi Q4 e-tron eventually goes on sale, it’ll join a growing marketplace of premium electric SUVs. Rivals include the Jaguar I-Pace and Volvo XC40 Recharge P8 – as well as the upcoming Tesla Model Y and BMW iX3.

What does the new Audi Q4 e-tron have to beat? Check out our list of the best electric cars on sale now…