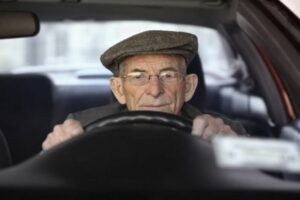 A study released by the Road Safety Foundation recommended changes to some driving laws, including mandatory tests as part of a series of recommendations to curb incidents on the road. Alongside the eyesight checks, targets have been set to reduce deaths and injuries on the road.

Elderly drivers need to reapply for a driving licence once they reach the age of 70.

After this time, if they want to continue driving, they will need to renew it every three years after that.

The Road Safety Foundation report, which was supported by the Department for Transport, found that things like road infrastructure and uncorrected eyesight needed to be improved to make roads safer.

In response to the report and its findings, Express.co.uk readers have voiced their concerns about the plans.

One Express reader, Peter Keen, claimed: “There is an unhealthy leaning towards curtailing the freedom of the elderly.

“The Government should concentrate on curtailing the driving of those not up to it.

“Frankly, the majority of accidents are in the younger age groups where inexperience, lethargy and ineptitude, are major factors.”

User David113 agreed, saying: “So it’s only the elderly who have poor eyesight and illnesses.

“These people are being targeted who grew up with the Highway Code when it is a fact younger drivers race around and have more accidents.

“This is being discriminate in the name of safety, another idea not thought through, and no common sense applied.”

Another reader believed punishments should go further for those involved in accidents who were otherwise distracted.

They said: “If you really want to keep death off the roads then no under 25’s to drive without full licence.