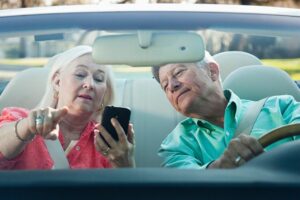 All the updates to parking fines explained in full in February

Many car parks have adopted parking apps that allow drivers to conveniently pay for their parking on their smartphones. However, in some cases, this is now the only way to pay. And, without the option to pay with cash, many elderly motorists without the ability to use the apps risk receiving hefty fines.

The measures have now sparked a national debate on whether older drivers should be forced to use parking apps, or if they should have the option to use cash instead in order to avoid the fines.

Ryan Fulthorpe, motoring expert at GoCompare, has claimed that elderly drivers should not be penalised for their inability to use the apps.

Mr Fulthorpe exclusively told Express.co.uk: “The advancement we have seen with technology has certainly made some of the arduous and boring tasks that much easier, parking being one of them.

“For me personally, parking apps have been a blessing, but not everyone is a fan.

“Elderly drivers who were happy with the way things were should not be penalised for not owning or being able to operate smartphones to pay for their parking, the tried and tested methods of entering your money into the meter should still remain to give access to parking to all.”

The debate has been going on for a while now.

It started when pensioners in Kent became furious with their council’s move to an app-only system for parking.

Drivers do have the additional option to phone up to pay, but some are frustrated that they are being forced to embrace the new technology.

Shelia Miller, 74, runs a local swimming group in Kent and regularly needs to use one of the car parks in question.

She said: “It’s ageist and absolutely discriminatory against the elderly.

“We can’t plead poverty as we can afford cars and drive. It’s just that many of the elderly do not have a smartphone, or know how to use RingGo.

“You need to be able to register with RingGo or download the app – but many in my group have found this impossible, and some do not know what an app is.

“Putting in bank details on a mobile can be scary for the older generation, as they are afraid of scams.”

The row reached national radio as BBC host Jeremy Vine raised the question of parking payment options on his show.

Former councillor Brian Coleman told Mr Vine that the elderly needed to keep up with the times.

He said: “Frankly, these older folk are driving a car which can be a very dangerous piece of machinery.

“Surely they can operate an app on a mobile phone.

“I’m happy to come down to Kent to run a session on how to download the app onto people’s phones. It makes life simple.”

In a recent poll carried out by Express.co.uk, drivers were asked if car parks should still accept cash amid the concern for the elderly.

Just one percent (31 people) said “no”, they should not and one percent said they did not know either way.

Dozens of comments were left below the accompanying article as readers shared their thoughts on cashless parking.

One reader named frances48, said: “Losing cash would be a disaster especially for the elderly.

“Many elderly people do not have smartphones and do not have cards or apps or anything else except cash.”