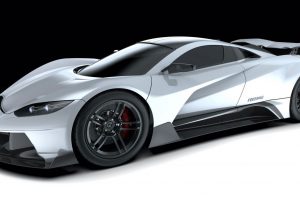 The automotive landscape has seen an increase in the number of EV startups over the past few years, with companies like Nio, Rivian, and Nikola Motors, just to name a few. The latest to join the crowd is Elation Hypercars, which was founded by Carlos Satulovsky and Mauro Saravia, with the aim of capturing “the feeling of elation in a single automotive masterpiece.”

Based in California, the company spent six years developing its first vehicle, and this is it, the Elation Freedom. While it may be an American company, development of the Freedom actually began in Argentina, with a team of engineers that have worked in Formula 1, Le Mans, and other European racing divisions.

The end result is a rather striking car to look at, featuring a low-slung body and plenty of aero-focused elements (front splitter, vented nose, side vents, and active rear wing) that give a strong race car vibe. It’s a rather larger vehicle too, measuring in at 4,495 mm long and 2,000 mm wide. The wheelbase spans 2,700 mm, although it’s exceptionally low with a height of 1,055 mm.

According to the company, the car features a carbon-fibre body and a carbon-kevlar monocoque chassis, the latter weighing in at just 81.6 kg and providing a torsional rigidity of over 65,000 Nm per degree. The chassis is paired with double wishbones at the front and rear, with bespoke Ohlins adjustable dampers and a pushrod system. Elation says the Freedom has a 45:55 front to rear weight distribution, while an electro-hydraulic active ride height system brings the car down to as low as 50 mm off the ground in race mode, or 100 mm in its normal setting.

Other components include 20-inch wheels with Michelin Pilot Sport Cup 2 tyres, while stopping power is provided by a Brembo carbon-ceramic braking system with six-piston front and four-piston rear calipers. These handling-related features are said to contribute to a maximum possible lateral g-force of over two g.

Opening the gullwing doors provide entry into the wraparound cockpit, which Satulovsky says was inspired by his time as a professional aviator. It’s a futuristic-looking place to be, with plenty of sharp angles, along with a good amount of expensive materials like carbon-fibre, full-grain leathers, precious metals, and even gemstones.

Given the looks, you’re probably expecting plenty of performance on tap, and you’re not wrong. In fact, the company is giving customers the freedom to choose from two powertrain options, including a fully-electric setup and an internal combustion engine. The former is the most interesting of the two, and sees the fitment of three permanent magnet synchronous motors that are liquid cooled, providing all-wheel drive with torque vectoring. One of the motors is mounted on the front axle, mated to a one-speed gearbox, while the remaining two at the rear utilise a two-speed transmission.

Altogether, the total combined output is 1,427 hp, or just over one megawatt, and 1,440 Nm of torque. The company says this is the base version of the powertrain, and customers can upgrade to a four-motor setup that bumps the power further to 1,903 hp, or around 1.42 megawatts. The performance figures are equally impressive, with a claimed zero to 100 km/h time of under 1.8 seconds, and an electronically-limited top speed of 418 km/h (260 mph).

Powering the motors is a T-shaped, lithium-manganese-nickel battery pack, which comes in 100- and 120-kWh versions. The lesser option offers up to 482 km (300 miles) of range on a single charge, while the 120-kWh unit provides up to 644 km (400 miles). Charging is done via Type 1 AC charging, or DC charging using a CCS connection – no charging times to speak of yet. If the thought of driving an EV isn’t that appealing, Elation also offers the Freedom in Iconic Collection guise, which is powered by an Audi-sourced 5.2 litre naturally-aspirated V10 that develops 750 hp at 8,250 rpm and 664 Nm. The mill is paired with a seven-speed S tronic dual-clutch transmission, and you still get all-wheel drive. The ICE model also has a lower kerb weight of 1,293 kg, with the EV tipping the scales at 1,650 kg.

Given the difference in power, the Freedom Iconic Collection is slower in the century sprint compared to its all-electric equivalent, requiring 2.5 seconds to complete the feat. The top speed is also lower at 386 km/h (240 mph).

Pricing also favours the EV version of the Freedom, as the base price starts from USD2 million (around RM8.2 million), compared to the Iconic Collection at USD2.3 million (around RM9.4 million). With additional options and customisation, expect the total sum to increase by a large margin.