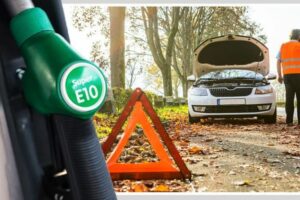 Within a matter of weeks, new E10 fuel will be on forecourts across the UK, as the push for more net-zero emissions continues. It is set to be the biggest change to forecourts since the Government banned four star petrol 20 years ago.

This is seen as the one of the first big steps towards the Government’s goal of lowering emissions.

In the biggest statement of intent, the Government will be banning the sale of new petrol and diesel cars from 2030 onwards.

However, some are warning that the steps being taken with the implementation of E10 are misguided.

Mark Cooper, Head of Product at motor insurance experts Carole Nash, commented on the new fuel and warned of its impacts.

Speaking to Express.co.uk, he said: “UK petrol is set to change this summer, with E10 becoming the standard grade at the pumps.

“The new standard will contain 10 percent bioethanol, up from five percent of the old E5 grade, and although it will make little to no difference for many motorists, it’s something to consider if you drive an older vehicle.

“Using E10 fuel in an incompatible petrol vehicle will not cause immediate harm but continued use could damage engine’s internal parts.”

The RAC estimates that around 150,000 Brits put the wrong type of fuel in their car every year.

Which classic cars will work with E10 fuel [ANALYSIS]

If a driver has misfuelled, the general advice is to leave the engine switched off and avoid putting the key in the ignition.

Motorists should then contact a company who specialise in fuel drainage to flush the fuel out of the system.

Most car insurance providers do cover misfuelling, but it is vital that drivers check their plan, especially with the confusion around the new E10 fuel.

Mr Cooper continued, saying: “E10 fuel is already on sale – and has been for some years – in many European countries and many manufacturers have ensured their vehicles already work with E10.