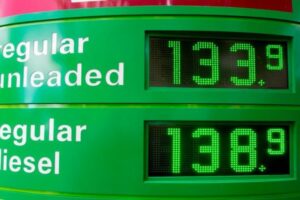 It is set to be the biggest change to UK forecourts since the ban of four star petrol 20 years ago.

The Government has set up a website where most drivers can check the status of their vehicles, and whether or not they will be compatible with E10.

While 95 percent of petrol cars will be able to switch to the ‘greener’ E10 unleaded, some cars will struggle with the changes.

Some estimates suggest almost one million vehicles are not compatible with the new fuel, with older classic cars set to be affected the most.

If drivers do have a car which may not be compatible with E10, they may have to resort to buying super-unleaded petrol.

This retains the current standard of five percent bioethanol mix.

However, it is typically 10p per litre more expensive than regular petrol.

This can quickly add up, with an average 50-litre tank costing an extra £5 every time they fill up.

If drivers fill up this much at the rate of once a week, this could result in an additional £250 being spent every year.

On its website, the Government stated: “Using E10 petrol can slightly reduce fuel economy (the number of miles you are able to drive on a gallon of fuel).

“You may see a reduction of around one percent, but it is unlikely to be noticeable in everyday driving.

“Other factors – such as your driving style or driving with under-inflated tyres or a roof rack – have a much more significant impact on fuel economy than using E10 petrol.”