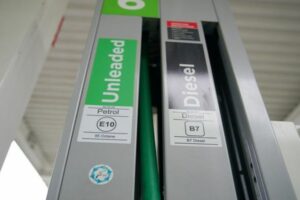 The new unleaded standard petrol was formally rolled out on the first of September and is set to affect 95 percent of drivers. The RAC said they do not expect the E10 rollout to adversely affect pump prices as the higher cost of bioethanol has already been included in the wholesale price of the fuel for some time.

August saw the average price of a litre of unleaded marginally fall by just 0.27p in the month to 135.02p.

Diesel also stayed at a relatively identical price across August at around 136.65p.

Drivers have endured a summer where pump prices have been around 20p per litre higher than prices between June and August 2020.

While very small reductions, what has happened to pump prices are in sharp contrast to just a month earlier which saw the largest monthly rise in the price of unleaded since January.

July 2021 saw the most expensive petrol prices in eight years.

Major supermarkets offer the best value fuel, with the average price of unleaded now standing at 132.09p per litre and diesel at 133.91p per litre, down in August by 0.34p and 0.41p respectively.

Rod Dennis, spokesperson for RAC, said: “A full nine months of continuous price rises finally came to an end in August, but that’s really no comfort at all to drivers who have been paying considerably more to fill up this summer than last year.

“While an end to rising prices is to be welcomed, it remains the case that there’s little immediate sign that pump prices are actually going to come down.

“What isn’t in dispute is just how much more expensive this second ‘staycation’ summer has been for drivers compared to 2020.

“With so many of us covering long distances this year, the effect of paying around 20p more per litre for petrol and diesel is likely to have been widely felt.”