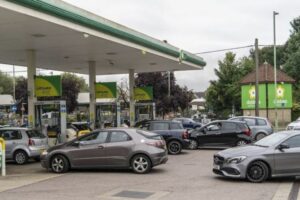 Drivers across the UK are having to fill their tanks more often due to a combination of low temperatures and the new E10 fuel. Despite E10 being introduced as an environmentally-friendly measure, some car owners are seeing marked reductions in how far they can travel on a tank, meaning more trips to the forecourt.

Cars that run on conventional petrol see their fuel economy drop by some 15 percent when outside temperatures drop in the winter, according to the US Dept of Energy.

For shorter trips of under five miles, that can be as much as 24 percent.

In hybrid vehicles the effect is even more pronounced with a drop in miles per gallon (MPG) of up to 34 percent.

And due to the reported reductions on mileage seen by motorists filling up with E10, that’s leading to an even bigger drop, hitting drivers in their wallets.

Motorists in the UK have been shocked at how E10 is impacting on their vehicles, with some telling of a reduction in how far they can travel of up to 20 percent per tank.

The replacement for E5 was brought in by the Government in September as a greener option due to it burning less fossil fuels.

But that benefit could be wiped out with drivers filling up more than ever.

And the winter months are proving to be a double-edged sword for car owners.

Cars are much less fuel efficient in cold temperatures due to a number of factors.

Engines and gearboxes produce more friction because of cold oil and fluids, meaning they work harder.

It also takes longer for a car to reach its most fuel-efficient temperature, which is why short trips are especially thirsty.

Express.co.uk has previously reported on how E10 is potentially more likely to freeze than conventional fuels in the winter.

Dr Dan Clarke, Global Head of Science and Technology at SulNOx Group Plc said:  “The main problem is that the additional bio-ethanol content in E10 prefers to mix with water as opposed to petrol.

“Where there is sufficient of both, it leaves the petrol and combines with the water to form a separate layer at the bottom of the fuel tank.

“The fuel line then draws from this watery alcohol mixture which is pumped directly into the engine.

“Equally, while petrol or diesel are very unlikely to freeze in the temperatures we typically experience in the UK, water condensation left in the empty fuel lines can easily freeze and prevent fuel from reaching your engine.”

Drivers can take some action to mitigate a winter reduction in MPG by following some simple steps.

They include using engine oil made for colder temperatures, parking in warmer spots to increase the initial temperature of the engine and not using defrosters more than necessary.

And running the engine while idling could actually be less effective – it’s better to drive off after 30 seconds because an engine will warm up faster being driven, and be more fuel efficient.

Owners of plug in hybrids or electric vehicles can increase their range by using the seat warmers rather than the main cabin heaters.