E-scooter trials to continue until 2024 despite dangers 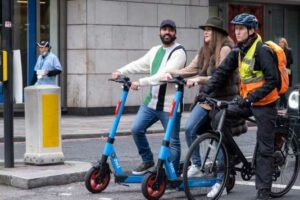 Transport for London (TfL) and London Councils are extending the capital’s trial of rental e-scooters until May 31, 2024. This extension follows the recent Government announcement of its plans to create a new vehicle category in legislation, in which e-scooters would be included.

Current contracts with e-scooter operators Dott, Lime and TIER will be temporarily extended to ensure the trial can continue and Londoners can continue to hire e-scooters until this procurement is complete.

This will allow TfL and London Councils to continue to collect data on this new mode of transport and test new innovative technology such as audible alerts to improve safety for people walking.

The trial has thrived since its launch in June last year, with 10 boroughs participating, more than 500 designated parking locations available, almost two million journeys made and 4,425 e-scooter vehicles now available for hire.

The Government has indicated it could legalise e-scooters through new transport legislation in the future.

The contracts with the e-scooter operators let under the new procurement may run for longer than the DfT national trial term in anticipation of new legislation being passed.

Throughout the continuing trial, operators will continue to be required to provide critical data for TfL and the participating boroughs to understand the impact of e-scooters on London’s transport goals.

This will include the Vision Zero aim to eliminate death and serious injuries from London’s roads.

Transport for London stated that “safety remains at the core of the trial”, despite concerns about accidents.

Jonathan White, Legal and Compliance Director at National Accident Helpline, said that education was key when it came to e-scooters.

Speaking to Express.co.uk, he said: “While the extension of the trial will offer an alternative to public transport and a ‘greener’ option than cars, the rampant use of private e-scooters is evading public authorities and causing a sharp increase in road traffic incidents and public injuries.

“In fact, in 2020, it was reported that 196 patients arrived at the emergency department of King’s College Hospital having suffered an incident involving an e-scooter, with 30 percent of those having suffered limb fractures.

“Not only does the lack of regulation around private e-scooters cause concern but the silent nature of the vehicles means pedestrians crossing roads, are very vulnerable to accidents.

“We conducted an online Census survey of around 2,000 members of the public and found that more than a third of Brits strongly believe e-scooters are not safe on public roads and cause traffic accidents.

“That said, we found that consumers would be encouraged to use e-scooters if more safety regulations were introduced.

“Given these safety concerns, it’s crucial that regulation is put in place to curb the illegal and dangerous use of private e-scooters, as well as reinforce rules for rental schemes too.”

He called on the DfT to make it clear to the public that it is illegal to use a private e-scooter on public roads and in almost all public places in the UK, and that they could incur fines and penalties if caught.

Mr White added that the Government department should take action against retailers which fail to properly inform customers of the risks and regulations around the use of private e-scooters.

In September, Kent County Council rejected an offer to extend its e-scooter trial as council officials want to prevent someone from being “seriously” hurt by the vehicles.

Sarah Carter, 80, suffered a broken wrist, cracked jaw and broken cheekbone after she was struck by an e-scooter being ridden on a pavement in July.

She called e-scooters “lethal”, adding that the council were “irresponsible” for the lack of infrastructure in place.

A spokesperson for Bird, the firm that operates the scooters, said the young man riding the scooter was immediately identified and blocked from using the service.

Despite this and other incidents, Will Norman, London’s Walking and Cycling Commissioner, said he was determined to continue building a “cleaner, greener and more prosperous London for everyone”.

He added: “With the right regulations that prioritise safety, rental e-scooters can help ensure a green, sustainable future for London.”