E-scooter accidents SOARING with injuries and deaths on the rise, worrying data shows 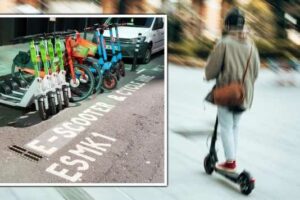 Almost 40 percent of injuries involving e-scooters in Britain last year were in London, the data shows.

Some 510 casualties were recorded in the capital by the Met Police, more than twice as many as in 2020.

It is illegal to use a privately owned e-scooter on public roads, as well as on pavements or in cycle lanes.

The only exception to this is using rental e-scooters as part of Government-run trials of e-scooters, which are currently taking place in around 30 areas.

E-scooters in these trials are limited to 15.5 miles per hour, though some may have restrictions limiting them further.

Users must have a full or provisional licence, and it’s recommended they wear a cycle helmet.

She said: “It is concerning to see these figures which show that in many cases e-scooters are still being used dangerously, putting the most vulnerable Londoners at risk.”

Meanwhile, walking charity Living Streets has called for the Government to enforce the ban on riding e-scooters on pavements.

Dr Rachel Lee of the charity said: “There are more than 750,000 illegal, privately owned e-scooters already being used on public roads.

“That can’t be undone. As well as legislating for e-scooter construction and use, Government must now address enforcement against use on pavements.”

A Government spokesman expressed “deepest sympathies” to those involved in these tragic incidents.

Speaking to The Times, they added: “While riding a privately owned e-scooter on public land is currently illegal, we are considering how best to design future regulations.”

Based on national figures, most of those injured are likely to have been the person using the e-scooter.

Last year, 309 collisions involved only one e-scooter, and no other vehicles, compared to 83 in 2020.

Others injured included a total of 223 pedestrians, 64 cyclists, 14 motorcyclists and 17 people in cars.

The Department of Transport (DfT), which puts together the data, says its best estimate, after adjusting for changes in reporting by police, is that there were 390 people seriously injured and 960 slightly injured in 2021, compared to 129 and 354 respectively in 2020.

Of those slightly injured in the collisions, common injuries include slight cuts, bruising, and sprains.

E-scooter users who were injured were much more likely to be men – around three-quarters – where gender was recorded.

They were most likely to be aged between ten and 19, followed by those aged 20 to 29.

Given the age profile of users involved in crashes, it may not be surprising that collisions peak around school run times, at 8am and 4pm.

There’s an upward trend starting at 6am and ending at 4pm with a dip at 10am, followed by a downward trend from 4pm to 10pm.