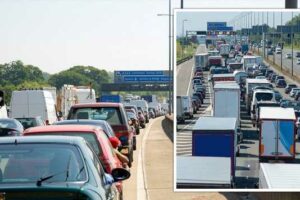 British drivers have been told to expect delays across the UK this weekend, as experts predict nearly 10 million journeys to be made by motorists across Saturday and Sunday. The experts at RAC Breakdown advised those planning to travel to set off early in the morning and avoid major roads.

With school half-term in full swing and the upcoming Platinum Jubilee, drivers will start planning their family getaways.

However, it might not be smooth sailing on the roads.

Experts at RAC Breakdown have warned that drivers can expect around 4.6 million journeys to be made today (May 28).

The same has been predicted for tomorrow (May 29) with four million journeys.

RAC traffic spokesman Rod Dennis said: “All eyes might be turning to the long Jubilee bank holiday just a week away, but before then we have the start of half-term which will no doubt see major routes to holiday destinations start to clog up.

“Drivers can beat the worst of the queues by planning the time of their trips carefully – an early start is always best or, failing that, driving at dusk if that’s a feasible option.”

Additionally, figures from transport analytics providers INRIX show the potential for some delays across the country.

This will specifically apply to the M25 anti-clockwise between J17 and J12 on Saturday morning.

On Sunday, drivers have been urged to avoid A720 west between the A1 and the M60 clockwise between J7 and J18, especially in the afternoon.

Bob Pishue, transportation analyst at INRIX, said: “Even with fuel prices continuing to rise, we still expect travellers to hit the road during the half-term break.

“Drivers should expect congestion on major roads around big cities and popular destinations.

“Knowing when and where congestion will build can help drivers avoid the stress of sitting in traffic.”

The congestions are set to get even worse next weekend as the UK will start celebrating the Platinum Jubilee.

Motorists have been told to expect huge delays with over 133,000 roads closed due to street parties.

According to a new poll, eight percent of people live on a road hosting a council-approved street party over the four-day bank holiday weekend.

An estimated five million people will be embarking on a holiday or day trip over that period.

The four days of celebrations will include public events and community activities, as well as national moments of reflection on The Queen’s 70 years of service.

Friday is expected to be the most popular day for street parties with 35 percent of those being planned.

Following this, Saturday will be the busiest with 25 percent of parties, followed by Thursday (15 percent) and Sunday (12 percent).

Some 13 percent of people did not know what day the Jubilee party on their road will take place when the survey was conducted between April 29 and May 3.

Green Flag, which estimated that five million people will be embarking on a holiday or day trip over that period, warned that the parties “could cause havoc for drivers”.

Mark Newberry, commercial director of Green Flag, urged drivers to plan ahead if they are going out over the weekend.

He said: “The extra day off means many of us will be planning trips away to make the most of the four-day weekend.

“We want to ensure everyone can enjoy the celebrations without any added stress or complications, so we’re urging drivers to check their route for any road closures and be aware of any obstructions or pedestrians that may be in the street.”