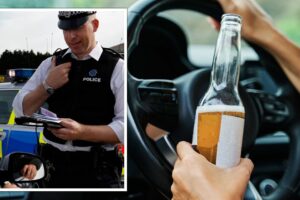 With another bank holiday coming up this weekend, drivers are being warned of massive fines if they drive drunk. Anyone supervising a “designated” learner driver while they are over the legal drinking limit can face fines of up to £2,500.

In addition to this, they can be handed 10 points on their licence as well as a ban from driving – even when they’re not at the wheel.

James Armstrong, CEO of Veygo, sent a warning out to British drivers to warn them of huge fines and a potential driving ban if they are caught out.

He said: “Lots of us will want to make the most of an extra day off this bank holiday by having a few drinks.

“So making arrangements for post-pub lifts will be at the front of people’s minds.

“A student or teenager who is learning to drive, looking to get in some extra practice and earn some extra cash might seem like a good candidate.

“Parents of learner drivers – or their friends – might be tempted to offer taxi money in exchange for a lift home, and cash-strapped learners might be happy to accept.”

With the weather forecast to be sunny, millions are expected to flock to the pub over the bank holiday weekend.

This also comes as the Government announced that pub opening hours would be extended to mark the Queen’s Platinum Jubilee in June.

Opening times for pubs and bars will be extended across England and Wales over the four-day bank holiday.

The extension will cover Thursday, June 2 until Saturday, June 4, with hours lengthened from 11pm to 1am.

Mr Armstrong continued, saying: “But many people don’t realise that accepting a lift from a learner – no matter how confident they are – means that, as a qualified driver, you are responsible for control of the vehicle.

“This means that you must comply with the rules you would normally adhere to if you were in the driving seat – including being under the drink drive limit.

“If you’ve enjoyed one-too-many before getting in the passenger seat with a learner driver at the wheel, you could face 10 points on your licence, a fine of up to £2,500, a three-month prison sentence or a potential driving ban.

“You also need to make sure you’re qualified to supervise a learner in the first place.

“Supervisors must be at least over the age of 21, have held their licence for three years and be insured on the vehicle.”

Drivers can expect to be hit with huge consequences if they are found to be drink-driving, including imprisonment, driving bans and fines.

If a driver is in charge of a vehicle while above the legal limit or unfit through drink, they may get three months imprisonment, a fine of up to £2,500 and a possible driving ban.

The most serious fine is handed out to motorists who cause death by careless driving when under the influence of drink as they face up to 14 years in prison, an unlimited fine and a ban from driving for at least two years.

James Armstrong gave a final piece of advice for any drivers who are going out this weekend.

He added: “So if you’re planning on having a few drinks, it’s best to avoid pulling in favours from learners and draw straws among those with full driving licences as to who will be the designated driver.

“Designated drivers can always take out temporary insurance from as little as one hour so they’re covered while they play the role of taxi.”

A conviction for drink-driving also means car insurance costs will increase significantly and they may have difficulties entering countries like the USA.