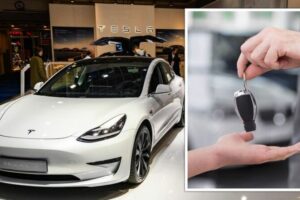 Drivers are being warned that some of the most popular electric cars on the market are attracting so much attention, they may be waiting until late 2023 for delivery. Demand for electric cars in the UK has surged in recent years, with one in five cars registered in February being fully electric.

Despite this, the global shortage of semiconductors has forced carmakers to slow down production of new vehicles, causing long delays.

Popular models like Tesla’s Model S or X have a waiting time which could last until late 2023, while the Porsche Taycan has a waiting time of anywhere between six and 18 months.

Ginny Buckley, Founder and CEO of Electrifying.com, said a “perfect storm” was to blame for the delays in delivery.

She said: “While the surge in demand for electric cars is welcome news, it’s led to delays for many drivers who are keen to make the switch immediately, maybe because their current lease is coming to an end, or they are keen to cash in on the current boom in used car prices.

“Cars like the VW ID.3 which were freely available 12 months ago now have waiting times of more than a year.

“This is down to a perfect storm of increased demand, coupled with a shortage of vital components caused by global events.”

Elon Musk announced earlier this week that Tesla had delivered a record number of cars in the first quarter, despite the numerous supply chain issues.

More than 310,000 vehicles were delivered worldwide in the first three months of this year, almost 70 percent higher than for the same time last year.

Drivers could face further delays with other models including a six month wait for the BMW i4 and at least 12 months for comparatively humble models like the Volkswagen ID.3.

Ginny Buckley added: “But if you can be flexible with your choice then there are some cars which are available within weeks rather than months, including popular models like the Tesla Model 3.

“It’s also worth checking at your dealership to see if there’s a brand-new car in stock, rather than a factory order.

“It may not be the exact version you’re looking for, but if you’re willing to compromise on the finishing touches like its colour and wheels, you might be able to get hold of a car in a few days, rather than a few months.”