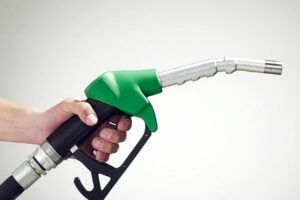 The latest RAC data shows that average petrol prices are around 165.73p. The situation is much worse for diesel drivers who will have to fork out 190.16p per litre of average. With that in mind, drivers have been warned about a “damaging” petrol station hack.

The habit of filling up to a certain monetary value is decades old, dating back to when all transactions were done with cash.

That meant putting exactly £20 of fuel in the tank would see you simply handing over notes to the cashier instead of having to dig around in the glovebox to locate loose coins.

But with the vast majority of people now paying on credit or debit cards, and many using the common “pay at pump” facility, there’s much less need to hit a specific mark.

A thread on forum-hosting platform Reddit discussed the subject, with some revealing insights.

One user wrote: “I just fill the tank to the brim. However, when I look around at other pumps, it seems like most other people do try and aim for a round number.

“I’d say around three in four pumps have one (or close to one). I don’t really understand why you would do that.”

Graham Conway, managing director at Select Car Leasing, said “topping off” is not the right answer when trying to make the most out of their money.

When trying to fill a tank, motorists could damage their car’s vapour recovery system.

He added: “Many people have a slightly obsessive-compulsive side to their character, so it is understandable that they want to hit a nice round number.

“But with the majority now shunning cash for cards, and even phone-paying apps such as Apple Pay and Google Pay, there is less need to be so accurate.

“It also removes the frustration of carefully trying to get to a certain mark and the counter somehow ticking over by a penny – an experience most will have had at some point.”

Most petrol stations will now have an option for drivers to press a button at the pump which will automatically fill the tank to a certain monetary limit.

A video of this feature went viral on TikTok recently, with many branding it a “game changer”.

It will also help drivers massively during the cost of living crisis when most motorists will need to make the most out of their money.

The Russian invasion of Ukraine has had a major influence on petrol and diesel prices across the world.

Fuel prices shot up once again in recent weeks after a major statement from the Organisation of Oil Exporting Countries (OPEC+).

The company announced that it would slash oil production by two million barrels per day.

“If we see pump prices go up within the next fortnight, we’ll know that retailers are sticking to their strategy of taking far more margin on every litre they sell than they have historically – much to the dismay of drivers up and down the country.

“We’ll be watching what retailers do when it comes to pump prices closely in the next few weeks.”