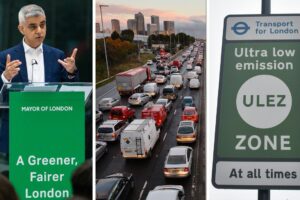 Sadiq Khan has asked Transport for London to consult on extending the ULEZ scheme’s boundary from the North and South Circular roads to the whole of Greater London in a bid to reduce pollution and congestion. All of Bexley’s Conservative representatives – including 33 councillors, two MPs, and its Assembly Member – sent an open letter to London Mayor Sadiq Khan.

They urged Mr Khan to listen to residents in Bexley and drop the proposals to expand the ULEZ zone across all of Greater London.

The open letter read: “We are writing to urge you to listen to the London Borough of Bexley’s residents and drop your plan to expand the Ultra Low Emission Zone (ULEZ) across Greater London.

“You do not have a democratic mandate to impose a new road tax on outer London, having failed to include it in your manifesto at last year’s London mayoral election.

“Bexley Conservatives stood on a clear manifesto promising to fight ULEZ expansion, offering residents a chance to have their say on your proposal at the ballot box for the first time.

“When households are feeling the squeeze due to the energy crisis and post-pandemic inflation, your tax and charge hikes are deeply irresponsible.

“Imposing ULEZ on Bexley as well would be a further blow to household budgets.”

Instead of an extension to the ULEZ zone, Bexley Conservatives suggested tackling air pollution through other methods.

The ULEZ charging area was last expanded in October 2021, moving from the Congestion Charge Zone to encompass the North and South Circular roads.

Mr Khan said there is “still far too much toxic air pollution permanently damaging the lungs of young Londoners and leading to thousands of deaths every year”.

The expansion of the scheme will mean that drivers of the most polluting vehicles which don’t comply with minimum emissions standards will have to pay £12.50 a day to drive anywhere in the capital.

In light of his latest plan, Mr Khan has decided against introducing a Clean Air Charge, which would have affected drivers of all but the cleanest vehicles.

He has also dropped proposals to charge drivers of vehicles registered outside London for entering the capital.

Cameron Smith is a Conservative Councillor for St Mary’s and St James in the London Borough of Bexley.

Speaking to Express.co.uk, he said: “At the elections, we stood on a manifesto opposing ULEZ.

“It’s the first time people have had a say on the proposal at the ballot box.

The most popular method of travel in Bexley is by car, with 56 percent of residents choosing to use a vehicle, compared to 23 percent walking and 10 percent taking the train.

They are the 11th highest borough in London for the number of vehicles on the road, but has less traffic than neighbouring boroughs like Greenwich, Bromley and Havering.

They also have the eighth highest rate of car ownership, with an estimated 27 percent of carbon emissions coming from transport emissions.

Express.co.uk have contacted London City Hall for a comment.