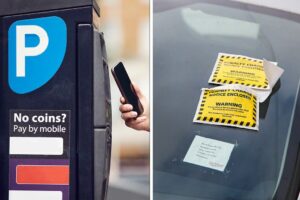 Several parking companies have reportedly begun legal action in order to stop the reduction of fines from £100 to £50. Instead, they want to increase them to a whopping £120. On top of that, the firms wish to keep the right to threaten drivers with debt collectors.

The plans have now been branded as “ridiculous” by many.

Speaking about the issue, AA president Edmund King said: “For too long, private parking enforcement has been allowed to degenerate into a Wild West where cowboy operators have been able to ride into a town and set their own rules and punishments.”

Unfortunately for motorists, the UK Government has backed down from stopping the proposals, The Sun reported.

This is due to the parking firms’ “legal arguments”.

Several companies have claimed that the reduction in fines will lead to more drivers breaking the rules.

They added that people should pay fines within 14 days to make it less expensive.

Certain firms said that paying the fine within 14 days could be cheaper than buying an actual parking ticket.

Motorists were eagerly anticipating the news of the new parking reforms that came into effect in February.

However, the proposals will now deal a massive blow to drivers who are already struggling with the cost of living crisis.

A Government spokesperson tried reassuring motorists saying: “We will continue to work with industry and consumer groups to introduce the code as quickly as possible.”

Nonetheless, Whitehall sources have told The Sun that the Government has “conceded” to parking firms in their wish to stop the capping on fines and banning of debt collectors.

Thankfully some positive features will remain such as a compulsory 10-minute ‘grace period’.

The new reform will also include working towards a fairer and more streamlined appeals process for drivers who claim they have made honest mistakes whilst getting their fines.

The amount of parking fines issued in the UK has increased from one million in 2010 to more than eight million in 2020.

Campaigners have previously urged the Government to bring forward legislation to cap the maximum amount private companies can charge, among other rules.

Under the proposals outlined by the Government, private car parks are supposed to display prices more clearly, introduce a fairer system for appeals and give drivers a grace period for lateness.

“[Our] new Code Of Practice will set out a clear vision with the interests of safe motorists at its heart, while cracking down on the worst offenders.”

The cap on parking fines in private car parks in England, Scotland and Wales was supposed to fall by 50 percent in most cases, benefiting millions, the Government said.

The plans do not apply to Northern Ireland.

Higher fines of £70 and £100 are meant to remain for serious breaches, such as parking in Blue Badge bays.