Home » Car Reviews » Drivers fined £700,000 after being caught out by bus lane cameras

Drivers fined £700,000 after being caught out by bus lane cameras 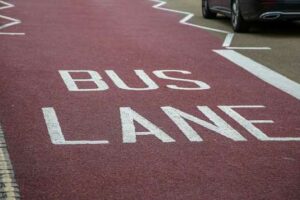 Should this driver have been FINED for using the bus lane?

Research carried out by Moneybarn showed the authority raked in £694,350 in bus lane fines in the 2020/21 financial year.

Motorists who illegally use bus lanes in Warrington face a £60 fine, which is reduced to £30 if paid within 14 days and increased to £90 after 28 days.

The town only has 10 bus lanes in total.

Motorists – other than those driving buses, taxis or emergency services – who unlawfully drive on these roads may be caught by the Automatic Number Plate Recognition (ANPR) cameras.

The figures come after the council came under fire from drivers in October 2021 when a new bus lane camera appeared on one of the Warrington roads.

Many motorists were issued fines despite claiming to be unaware of the changes, even though the council stated that warning notices were put into place three weeks prior.

The council announced two months later it would refund fines and install extra signs to remind motorists of the change.

“All of the signage notifying motorists of the new bus lane cameras on Scotland Road has been thoroughly checked and conforms to national standards.

“Warning notices were also issued three weeks ahead of the cameras being activated.

“An information leaflet showing the routes to use when accessing Prince Henry Square car park at Cockhedge and Town Hill has been produced and can be found on the council website.”

The news comes after a driver was fined for parking on a motorway hard shoulder as they attempted to avoid Manchester Airport parking charges.

An apparent attempt to avoid parking charges proved very costly for the driver.

The motorist was hit with a fine after they attempted to park on the hard shoulder as they waited to pick people up from Manchester Airport.

The driver was most likely trying to avoid parking charges or the traffic associated with the airport.

However, their attempt was thwarted after traffic police officers spotted the dangerous and illegal parking.

Officers from North West Motorway Police found the car parked up on Friday and hit the driver with a Traffic Offence Report (TOR) that comes with a fixed penalty.

In a social media post, the force said: “Driver seen by ME54 stopped on hard shoulder at Manchester Airport waiting to collect people – TOR issued.”