Home » Car Reviews » Drivers face staggering fines up to £5,000 for wearing Christmas clothing behind the wheel

Drivers face staggering fines up to £5,000 for wearing Christmas clothing behind the wheel 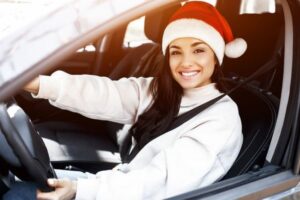 Because rule 97 of the Highway code states that correct footwear should be worn, donning a hefty pair of Santa boots could be classed as driving without due care and attention. It notes: “You should ensure clothing and footwear do not prevent you using the controls in any manner.”

Correct footwear is important because wearing high heels or platforms can stop drivers being able to reach the right pedal in time.

According to the RAC, 40 percent of women have admitted to driving in high heels, and although they may look classy, high heels are simply not practical for the pedals.

But any kind of festive fancy dress could impede the operation of the car and it’s that which could land the driver with a fine of as much as £5,000 if it goes to court.

That’s in addition to a possible disqualification and nine points.

Police are also able to levy a £100 on-the-spot fine and three penalty points for careless driving if you wear inappropriate clothing that restricts you from manoeuvring correctly.

As Michael Bourne, group marketing director at National Tyres and Autocare explains: “Driving in outfits that impact your driving ability could cause an accident.”

Other outfits that could cause an issue include reflective material or anything that lights up, due to the possibility of distracting other road users.

Sparkly or light up Christmas jumpers could therefore come under this category.

“We recommend making sure your outfit doesn’t impact your driving ability as well as others, and if it does, take your outfit to the venue and then get changed there,” said Mr Bourne.

But even common clothing such as baggy jeans or a simple dress could see drivers caught out and issued penalties.

Alastair Grier, Director of CarMoney has warned: “Wearing some clothing could also affect the price of your car insurance.

“It could increase dramatically if you are involved in a car accident and you were behind the wheel in inappropriate clothing that forced you to drive carelessly.”

But it isn’t just Christmas clothing that could land drivers with a £5,000 fine.

UK drivers getting ready for the festive season could also be hit with the demand for incorrectly transporting home a Christmas tree.

Not securing a tree properly to the roof of a car when driving it home could mean committing driving offence ‘CU50’ – “Causing or likely to cause danger by reason of load or passengers”.

In addition to the eye-watering fine, that could result in three penalty points and an endorsement that has to remain on the license for four to 11 years.

Driving fines appear to be in the ascendancy across the UK at the moment, just this week it was revealed how councils are to be given powers to fine drivers themselves without police involvement.

That’s for committing even minor mistakes like stopping in a yellow box junction or making a wrong turn.

From December 1 councils are able to send out fines for these offences which can range from £70 to £130 in some boroughs of London.