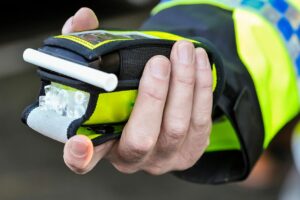 If a motorist is driving or attempting to drive while above the legal limit they may receive six months imprisonment, an unlimited fine, and a driving ban for at least one year (three years if convicted twice in 10 years). Experts at Admiral have also revealed that car insurance costs will increase by 152 percent for drivers who are convicted.

Drink-driving remains a menace on Britain’s roads, with thousands continuing to drink and then jump behind the wheel.

The latest annual figures from the Department for Transport estimate that 220 people were killed by drink-drivers.

UK sales of non-alcoholic beer, cider, wine and spirits are overflowing, with figures showing a 170 percent annual growth in the ‘no and low’ alcohol market.

Being in charge of a vehicle while above the legal limit or unfit through drink can lead to three months imprisonment, a fine up to £2,500, and a possible driving ban.

Driving or attempting to drive while above the legal limit or unfit through drink can lead to six months imprisonment, an unlimited fine, and a driving ban for at least one year (three years if you have been convicted twice in 10 years).

Refusing to provide a specimen of breath, blood or urine for analysis can lead to six months imprisonment, an unlimited fine, and driving ban for at least one year.

Causing death by careless driving when under the influence of drink can lead to 14 years imprisonment, an unlimited fine, a ban from driving for at least two years, and an extended driving test before your licence is returned.

On top of the fines, drivers could also face double insurance costs.

Admiral Insurance has issued a warning to drivers that a drink-driving conviction could see motor insurance premiums rise by a huge 152 percent.

For some drivers it could be higher, if it included a driving ban or disqualification.

New data from Admiral Insurance found that drink-driving is one of the most common motoring convictions that customers notify them of when they renew their policies.

If drivers have an accident while drink-driving many insurers will refuse to cover the cost of the claim, meaning drivers could be left with hefty sums to pay including the cost of third-party claims.

Clare Egan, Head of Motor at Admiral, said: “As we approach a bank holiday weekend drivers are likely to be faced with situations where they have the opportunity to drink which could potentially put other road users, pedestrians, and themselves in danger.

“Whether that’s a trip to a country pub or a friend’s barbecue.

“After speeding and failing to stop at traffic lights, drink-driving is the most common motoring conviction that customers notify us about.

“Our data also found that men are far more likely to receive a drink-driving related motoring conviction – of the customers that declared this conviction to us last year, 76 percent were male.”

A drink-driving conviction is one of the offences that can remain on a driving licence for up to 11 years because of its severity.

Ms Egan added: “There are additional financial implications, too.

“Those convicted could find their insurance premiums increasing by more than 150 percent – that’s if they can get insurance at all.

“Someone coming to Admiral for a new business quote who has received a drink-driving conviction could see the premium quoted increase by up to 152 percent.

“If it included a driving ban or disqualification, as many do, it will be higher still.”