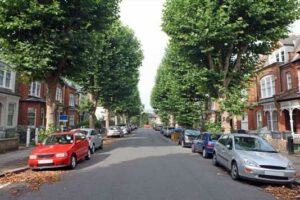 Even though 75 percent of UK adults have a driving licence, many lesser-known laws can catch them out. As many as seven in 10 motorists in the UK are unknowingly breaking Highway Code rules on a regular basis.

If a parked car was involved in an accident and authorities decided the driver was at fault for parking it against Highway Code regulations, further action could be taken.

He said: “Many of the laws surrounding UK driving are understood by most road users and wouldn’t present much of a problem.

“But what catches drivers out are the less common laws – these are the ones that you likely don’t think about when behind the wheel.”

Chris said that many drivers don’t know that they aren’t allowed to park their cars against the flow of traffic at night.

He explained that vehicles should be parked facing oncoming traffic, so that other drivers don’t get confused when the red from the rear and white from the front are reflected.

Rule 248 of the Highway Code states: “You must not park on a road at night facing against the direction of the traffic flow unless in a recognised parking space.”

The following rule also tells drivers that they must display parking lights when parked on a road or a lay-by on a road with a speed limit greater than 30mph.

Motorists in cars caught flouting the rules of the Highway Code could be fined £1,000.

This may shock drivers into parking properly, with the average parking fine costing motorists just £70, increasing to £140 if not paid within the time limit.

This can rise to £2,500 for goods vehicles and passenger vehicles carrying eight people or more.

With the winter months approaching, motorists are also warned when parking in fog.

Rule 251 clarifies that it is “especially dangerous” to park on the road in fog, and if it is unavoidable, drivers should leave the parking lights or sidelights on.

However, this only applies if they are at least 10 metres away from any junction, close to the kerb and facing in the direction of the traffic flow. They should also be in a recognised parking place or lay-by.

Other vehicles and trailers, and all vehicles with projecting loads, must not be left on a road at night without lights.

A spokesperson for car scrapping comparison site scrapcarcomparison.co.uk previously said: “Motors parked the correct way would be visible and illuminated by headlights bouncing off the rear reflectors.

“Rule 248 of the Highway Code states ‘you must not park on a road at night facing against the direction of the traffic flow unless in a recognised parking space,’ and not many motorists are aware of this.

“We’ve dealt with cars that have been written-off due to a passing car crashing into them as they have partly stuck out from a parking space.”