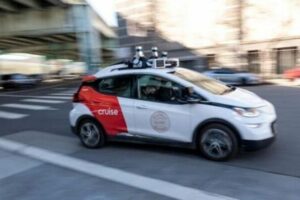 Baffled San Francisco police officers were faced with a challenge after stopping a self-driving vehicle with no-one inside. Officers initially approached the car, operated by Cruise, because it had been driving without headlights.

In the incident which was captured on film by an onlooker and posted to social media, a member of the public remarks that “there ain’t nobody in it” before the car moves to what Cruise said was a safer location.

The video shows police officers pulling over the self-driving taxi before walking around the vehicle, trying to open its doors with no luck.

Then incredibly the Chevy Bolt takes off as bystanders shout and laugh, however it parks a few yards away after the next junction with its hazard lights on.

Cruise, which is owned by General Motors and develops self-driving technology, has been testing autonomous vehicles (AVs) in the US.

Earlier this year it started allowing members of the public who join a waiting list to hail free night-time rides.

The company tweeted: “Our AV yielded to the police vehicle, then pulled over to the nearest safe location, as intended.

“An officer contacted Cruise personnel and no citation was issued.”

The company has produced a YouTube video for police and other “first responders”, setting out how they should interact with AVs.

It says in the video that the vehicles have microphones that can identify the sounds of sirens.

It states that the “AV can detect lights and sirens so it will come to a stop”.

The video also explains that officers should call a dedicated phone number to reach the company’s “escalation team” before approaching a vehicle.

It explains: “For example, the escalation team can do a number of tasks remotely, including unlocking the vehicle… and ensuring that the vehicle remains in a safe stationary position.”

In February, Cruise, owned by General Motors, was authorised to collect fares from passengers and offer shared rides.

This was after GM and Google petitioned US regulators for permission to deploy a limited number of self-driving vehicles without human controls like steering wheels or brake pedals.

In this instance, Cruise said that the issue with the headlights not being on was caused by human error.

The new rules update regulations that assume vehicles “will always have a driver’s seat, a steering wheel and accompanying steering column, or just one front outboard passenger seating position.”

The rules, which were first proposed in March 2020, do say that automated vehicles must provide the same levels of occupant protection as human-driven vehicles.

NHTSA Deputy Administrator Steven Cliff said: “As the driver changes from a person to a machine in ADS-equipped vehicles, the need to keep the humans safe remains the same and must be integrated from the beginning.”