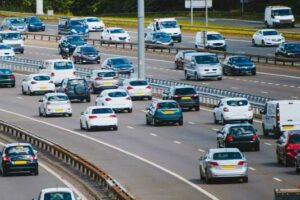 An apparent attempt to avoid parking charges proved very costly for the driver. The motorist was hit with a fine after they attempted to park on the hard shoulder as they waited to pick people up from Manchester Airport.

The driver was most likely trying to avoid parking charges or the traffic associated with the airport.

However, their attempt was thwarted after traffic police officers spotted the dangerous and illegal parking.

Officers from North West Motorway Police found the car parked up on Friday and hit the driver with a Traffic Offence Report (TOR) that comes with a fixed penalty.

In a social media post, the force said: “Driver seen by ME54 stopped on hard shoulder at Manchester Airport waiting to collect people – TOR issued.”

Some people responded by expressing shock at the action while others said it was an all too common occurrence.

One user wrote: “I just don’t see the point in people parking on hard shoulders, yes I know airport parking can be expensive but I’m pretty sure it isn’t the equivalent cost of the fine unless you’re there all week?!”

Another commented: “I drive a bus around the airport and it’s ridiculous how so many people park on the hard shoulder, roundabouts within road traffic cones where the building works happening on the pavements next to the entrance of the bus station need to put some cameras up and get people fined.”

The news comes after a taxi driver was ordered to pay £2,700 in repair costs after he smashed a Glasgow Airport ticket machine that charged him £4 for parking.

Atif Amin became enraged after he was told he must pay a £4 charge for using the drop-off, pick-up facility.

The taxi driver was adamant that his disability parking badge allowed him free entry into the NCP car park.

After being told that he must pay the charge, Amin smashed the display screen of the payment machine with a torch, causing £2,700 worth of damage.