Driver fined £1,000 for having ‘robust exchange’ with cyclists – ‘upper end of careless’ 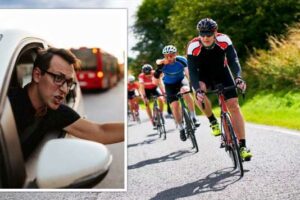 Iain Macdonald, from Inverness, drew up too close behind a group of cyclists and sounded his horn repeatedly. When the opportunity arose, the driver overtook the cyclists, but it was deemed to be too close to the six riders.

Inverness Sheriff Court heard that Mr Macdonald then stopped ahead of them, forcing them to take evasive action, and then gave them a piece of his mind.

Solicitor John MacColl said: “His position is that the cyclists were taking up the whole width of the road when there was no need to.

“He decided he wanted to speak with them, stopped and there was a robust exchange.

“Then he saw red and used industrial language.

“He has a number of jobs currently from Kiltarlity to Dunbar and he is concerned about the loss of his licence.

“He drives 30,000 miles a year and employs two people,” the Inverness Courier reported.

Mr Macdonald, 63, admitted driving carelessly on the B9154 near Moy on May 1 last year and threatening or abusive behaviour by shouting and swearing.

Sheriff Ian Cruickshank said: “This is at the upper end of careless driving.”

Despite this, he decided against imposing a ban or enough points to bring about a disqualification.

This is one of a number of instances where drivers have been fined or received penalty points on their licence for driving too closely to a cyclist.

At the end of April, a motorist was fined £417 after driving “too closely” to cyclists at “excessive speed”, with a clip of the incident sparking fierce debate.

He was fined £417 and received five points for careless driving.

Another video showed a Land Rover overtaking a group of cyclists, causing one of them to be knocked off their bike.

This driver was also fined more than £1,000 for driving without due care and attention, which was described as a “reckless overtaking manoeuvre”.

The police have been warning drivers to be careful when on the roads, following new guidance from the Highway Code.

New Highway Code advice was unveiled in January, which ensured quicker or heavier modes of travel have the greatest responsibility to reduce the danger or threat they may pose to others on the road.

Motorists were also urged to adopt the “Dutch Reach” manoeuvre in a bid to protect cyclists and pedestrians.

This is where the driver and passenger reach to open their door using the opposite hand, resulting in them turning their body and getting a better view at oncoming traffic.

Cyclists will also receive fresh guidance to ride in the centre of a lane on quieter roads, in slower-moving traffic and at the approach to junctions in order to make themselves as clearly visible as possible.

They were also reminded they can ride two abreast – as has always been the case and which can be safer in large groups or with children.

They were advised to be aware of drivers behind them and allow them to overtake if it is safe to do so.