Driver caught speeding at 140mph claims he was only going 75mph – ‘total disregard!’ 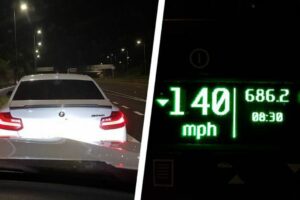 Police officers pulled over a BMW driver who was travelling at an astounding 140mph on the M62. The motorist also had the “audacity” to tell officers that he was only doing 75mph.

A highways traffic officer claimed that the driver, who already had six points on his driving licence, showed “complete disregard for road safety”.

He was also one of “many drivers” on the Yorkshire stretch of the motorway to commit the offence.

PC Martin Willis, who has been nicknamed “Motorway Martin”, took to social media to describe the incident that happened on Friday.

PC Willis posted a photo of the vehicle on social media.

The photograph also captured the speed monitor that showed the BMW was travelling at 140mph.

The West Yorkshire Police officer wrote: “Just another of the many drivers on the M62 tonight who have a complete disregard for road safety.

“The driver of this vehicle even had the audacity to try and claim that he was only doing 75mph.

“He already has six points on his licence (you’ve guessed it) for speeding. No words.”

However, this was not the fastest speed ever recorded on a British motorway.

Yorkshire Live reported that last year a driver was caught speeding at more than 150mph on the M62.

Humberside Police said the motorist, who was clocked at 154mph, had claimed he was “testing the car’s performance”.

It was one of the fastest speeds recorded by police on the road.

Earlier this year, the M62 was revealed as the worst stretch of road in East Yorkshire for speeding, with 3,500 separate cases between the county boundary and J35, near Rawcliffe Bridge, in 2021, according to Safer Roads Humber.

Earlier this year it was also revealed that a record number of drivers managed to avoid fines and penalty points added to their licence, despite being caught speeding among other offences.

More than 1.5 million drivers took speed awareness and other training courses in 2021.

This option is given to motorists to allow them to avoid fines and having points added to their driving licence.

Figures from the National Driver Offender Retraining scheme showed that 1.5 million licence holders completed a course in 2021 as an alternative to a fine and possible penalty points.

This was up from 1.3 million during the previous year and represents the highest annual total on record – although these figures have only been held since 2014.

Of the 1.5 million training courses attended last year, 86 percent were speed awareness sessions, according to the data accessed by PA.

These are offered to motorists caught exceeding a limit but within an “acceptable” range.

The aim of the courses is to help people identify speed limits and recognise the potential consequences of driving too fast.

However, only those who haven’t attended a speed awareness course in the previous three years are given the option to take one.

These courses generally cost between £73 and £95 and help drivers escape having points added to their licence and minimum fines of £100.

Drivers cannot complete more than one course within three years.