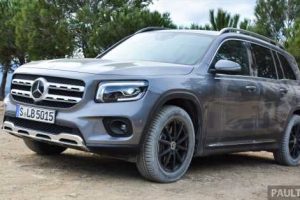 Given the popularity of SUVs these days, car buyers are certainly not short of options. It almost seems like every market niche that exists has a model to fill it, be it something small, big, fast, fuel-efficient, electric or even imbued with some coupe-like styling.

However, automakers are always on the hunt for new ways to expand their market reach, and for Mercedes-Benz, it has identified that what people want is a seven-seat SUV, so enter the GLB. But wait, you might be thinking; doesn’t the company already have the GLE and GLS – both offered as seven-seaters – so why bother making another one?

Well, not everyone wants a seven-seat SUV with a premium badge that occupies a large footprint, that’s one. Secondly, those who are hoping for a three-row GLC don’t have such an option, and the jump to a GLE commands quite a hefty premium, so something more affordable is always appreciated.

From a business standpoint, this particular space isn’t filled with many rivals either, with the Land Rover Discovery Sport being a notable mention, while rivals like Audi, BMW, Jaguar and Volvo have no entrants at all. As such, there’s a perfectly good reason for the GLB to exist, and is primed to be a popular choice among buyers. But can it distinguish itself enough to be relevant? Is it any good to live with? Well, in a not so distant past, before the Covid-19 pandemic, we sampled the GLB in Andalusia, Spain to find out. At first glance, the GLB certainly looks to be quite an oddball in the Mercedes-Benz SUV line-up. Unlike its stablemates, the SUV appears to be a shrunken down version of the GLS, albeit with a much boxier body that exudes ruggedness. It even gets a unique cue not seen on other Mercedes-Benz SUVs, a slight kink on the window line near the rear doors.

The family face with a six-point grille is present on the GLB, but with rectangular-shaped headlamps instead of sleeker units. There’s also a less curvaceous roofline here, which leads into a large, upright tailgate, and you get the typical SUV cues like black body cladding an underguard upfront when specified with certain trim levels that aren’t the AMG Line.

With everything put together, the GLB looks like a decent and tough-looking family SUV, with a greater emphasis on practicality rather than outright style. The final design isn’t overly extravagant and neither is it offensive, but those who hoping for something shapelier won’t be enticed.

If the GLB looks rather big, that’s because it’s the largest (and seventh) member in the company’s revamped, eight-model compact car range, which also includes the A-Class, A-Class Sedan, A-Class L Sedan, B-Class, CLA, CLA Shooting Brake and GLA. Like those cars, it is built on MFA2 architecture, with dimensions that are closer to the GLC. Moving inside, the benefits of the boxy shape become evident, as you get an abundance of headroom, regardless of where you are seated. While the seven-seat variant is the one that gets the most attention, Mercedes-Benz also offers the GLB with five seats. With the former, it says the third row can accommodate people with a height of up to 1.68 metres comfortably, so that’s something worth testing.

Getting my 1.7-metre frame into the third row is simple enough, with a one-touch mechanism to tilt and slide part of the second-row bench forward, although the relatively small ingress aperture makes it a bit of a squeeze getting in.

As you can tell from the photos taken, headroom isn’t a problem – even across all rows – but it’s the legroom in the last row that is. For kids and smaller adults, I reckon it would be less an issue to have their legs shoehorned in the footwell, although those in the second row might still want to slide the 40:20:40 split-folding seats forward out of mercy.

If there’s no need to make use of all three rows, there’s plenty of space for just five occupants, and the generous glass sections provide a sense of airiness inside the cabin. Scattered around the cabin are some practical touches too, with a decent amount of storage cubbies, along with USB-C charging ports for the third row (great for kids and their devices), but strangely none for the second row.

On that mention, with the seven-seat variant, you’ll get just 130 litres of boot space with all the seats in their default position, and 1,680 litres when the second- and third-row are folded down. The five-seater offers more with 570 litres, or 1,805 litres in max cargo mode.

Seating and storage concerns aside, the rest of the GLB’s cabin will be familiar to you if you’ve ever been in one of Mercedes-Benz’s recent compact cars like the A-Class. In short, it looks expensive, and you get the Mercedes-Benz User Experience (MBUX) system to play with, which features two 10.25-inch displays, crisp graphics, an intuitive interface and a multitude of ways to interact with. Dig a little deeper and you’ll find that the lower reaches of the cabin aren’t as nice to the touch, but this isn’t a total deal breaker. With customisable ambient lighting complementing the metallic-effect and piano black trimmings, Artico man-made leather upholstery as well as those flashy air vents, there’s still enough luxury and wow factor on show here.

As for driving the GLB, the 200 mm ride height nets you a high driving position, and it makes for a rather easy vehicle to see out of, particularly the edges and blind spots – those large windows help too. As such, navigating the narrow streets within the region, even in left-hand drive press cars, wasn’t a daunting experience.

During our time there, we had access to three GLB variants that were recently launched here, including the base GLB 200, GLB 250 4Matic and the AMG GLB 35 4Matic. Our first stint was in the variant with the least digits in its name but has the most power on tap, with the GLB 35’s M260 2.0 litre turbo-four making 306 PS (302 hp) and 400 Nm of torque.

Safe to say, there’s no shortage of performance here, as the AMG variant takes just 5.2 seconds to complete the century sprint and is limited to 250 km/h. The attached eight-speed dual-clutch transmission is also smooth during normal operation, with gear shifts performed quickly and seamlessly. With peak torque arriving from 1,600 rpm, it’s definitely brisk in urban environments.

Additionally, the stiffer sport suspension does well to manage the vehicle’s weight, keeping body roll well under control. It’s not perfect, as secondary ride is noticeable inside the cabin even with the adaptive dampers in Comfort mode, but it’s not completely unbearable.

When pushed a little, the GLB 35 offers large reserves of grip on hand afforded by the front-biased 4Matic all-wheel drive system and with decent weightage from the steering for some surety at your fingertips.

However, there’s this sense that the GLB 35 is still being held back by a certain degree so it doesn’t go overboard with the delivery of the performance. It’s a different feeling when compared to other AMG performance SUVs, more high-speed cruiser rather than lap-time chaser.

It doesn’t egg you on to push harder every time you drive it, and that’s perfectly fine for most people. Not that anyone looking to buy a GLB will care about reaching the car’s limits or want to be terrified behind the wheel, but it’s assuring to know that you can pick up the pace easily when needed. Even so, the GLB 35 is quite an overkill proposition in my eyes, but performance-hungry individuals with large families who need to chew up highway miles quickly will be properly satisfied. That’s all well and good, but in my opinion, the variant that truly hits the sweet spot is the GLB 250 4Matic.

While it doesn’t provide the same shove or eagerness as the GLB 35, the GLB 250’s powertrain isn’t slouchy and certainly won’t leave you wanting in the majority of situations. Around town, there’s enough low-end grunt so you don’t need to work the right pedal too hard, and the engine doesn’t feel laboured when trying to get up to highway speeds rapidly. No pops and farts like the GLB 35 here, so there’s subtlety too.

Moreover, the comfort-oriented suspension and equally well-weighted steering makes it a good tourer and more compliant when coping with bumps and surface changes, albeit in exchange for a little more roll. Credit goes to Mercedes-Benz opting for thick 50- and 55-profile tyres to be paired with the 18- and 19-inch wheels – the GLB 35 we tried has massive 21-inchers with 35-profile tyres. The GLB 250 can also be ordered with an Off-Road Engineering package, which adds an additional “Offroad” drive mode to the Dynamic Select system, along with a Downhill Speed Regulation (DSR) function and special displays in the digital instrument cluster.

On that second bit, we did get a brief demonstration on a specially-prepared off-roading track. No surprises that the car went through mild obstacles without much of a fuss, with the dedicated Offroad mode ensuring the powertrain is tasked with maximising traction, while the DSR system allows you to limit the speed of the car while descending from a high elevation.

Sounds great, and with 18-degree approach, 18.3-degree departure, 35-degree tilt and 13.9-degree breakover angles, along with 70% gradeability, the GLB does appear to go beyond most road-biased SUVs. Even so, you (obviously) shouldn’t expect G-Class levels of capability, but for the occasional family camping adventure, it’s all well within the GLB’s abilities.

It’s a variant worth thinking about if you spend most of your time around town, with performance that can be deemed as acceptable. With a full load comprising of people and things, it’s not far-fetched to think that the lack of oomph will cause it to struggle quite a bit – we only had two passengers and a few bags then. The zero to 100 km/h time of 9.1 seconds and 207 km/h top speed don’t provide a lot of confidence either.

On the move, the pint-sized engine remains largely quiet, but does get a bit trashy and sound unrefined when you pile on the revs to get to what torque is available. Diesel variants – GLB 200 d, GLB 200 d 4Matic and GLB 220d 4Matic – with more pulling power exist for the GLB, and should be more capable, but we’re not getting those, so never mind. Ride comfort feels pretty similar to the GLB 250, with the seven-speed pulling smooth shifts, although it does seem inferior to the eight-speed unit. There’s also quite a bit of buffeting near the wing mirrors at higher speeds, but this isn’t exclusive to the GLB 200, as it was also heard on the GLB 35 and GLB 250 as well.

All in all, the GLB is a well thought out SUV for those who want a tristar-badged, seven-seat SUV, but don’t want to pay excessively for its larger siblings. Honest in its design, the GLB focuses on function over form, which is rather refreshing given the lust for coupe wannabes these days. Add to this a practical interior with three-row seating, and it’s well suited to those with families and need some extra space every now and then.

It doesn’t possess the most thrilling driving dynamics, but it’s still enjoyable and with good road manners as well as capable powertrains, the GLB ticks plenty of boxes, while having no issue distinguishing itself from its two siblings it sits between. So, not a bad effort from Mercedes-Benz then. Now, what other niches do they plan to squeeze themselves into?

The Mercedes-Benz GLB has been launched in Malaysia, and is available in two regular, seven-seat variants – the GLB 200 Progressive Line and GLB 250 4Matic AMG Line – as well as a a five-seat AMG variant – the GLB 35 4MAtic.