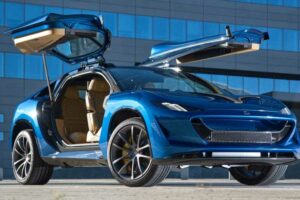 It seems gullwing doors on fast, electric SUVs are a thing. And the new Drako Dragon is very fast indeed, with a claimed 0-60 mph sprint taking just 1.9 seconds en route to a top speed of over 200 mph. These are indeed lofty numbers, but Drako Motors backs it all up with a powertrain that pumps out 2,000 combined horsepower.

This is the Dragon, Drako’s follow-up to the GTE EV supercar that garnered some attention back in 2020. Save for a couple of Dragon teasers, we haven’t heard much from Drako since the GTE but the young company is certainly ambitious. The Dragon is technically a two-door SUV, though the large gullwings open for ample access to the front and rear seats. There’s space for five people inside, but we suspect you’re not particularly interested in that. You want to know how this electric SUV gets to 60 mph in the same time as the world’s fastest production vehicles.

Motivation comes from a quad-motor powertrain that is derived from the aforementioned GTE. Each wheel gets its own motor, powered by a battery pack designed in-house by Drako. Details of the pack aren’t provided, but the company says it can fast charge at 500 kW to reclaim 80 percent of its range in 10 minutes. That’s an estimated 336 miles, with Drako estimating the Dragon’s entire range at 420 miles on a full charge. The system is managed by Drako DriveOS; a single multicore ECU that actually manages everything on the SUV.

Another factor in the Dragon’s performance is its full carbon fiber structure. Drako says it’s the first SUV to use such a structure, cutting weight by 50 percent while increasing rigidity. With a curb weight of 4,969 pounds, it isn’t exactly a featherweight. But it weighs slightly less than the Tesla Model X Plaid while having more range and nearly double the power.

The Dragon was designed in Italy with an eye for exotic style, performance, and efficiency. The front features a shape similar to the Dodge Charger Daytona SRT concept, with an open nose and curved hood that funnels air up and over the car. Flying buttresses at the rear also channel air for downforce and smoother flow.

Moving inside, a tech-focused interior features a 17.1-inch center touchscreen with a smaller driver display. There are tactile controls on the steering wheel in an otherwise minimalist layout. A rear-seat entertainment system is available, and a close look at the corners of the dash reveals screens for the side cameras. A Drako Motors representative told Motor1.com that standard side mirrors would be available for US buyers if cameras aren’t legal by the time the Dragon goes on sale.

There’s quite a bit of time for that to happen. The Drako Dragon will be built in the US with a target production of 5,000 models annually. However, initial customer deliveries aren’t expected until 2026. Pricing will start at $290,000, and reservations are currently being accepted.

See all the news about the Los Angeles Auto Show

You can see the Drako Dragon at the 2022 Los Angeles Auto Show, running November 18-27 at the Los Angeles Convention Center.