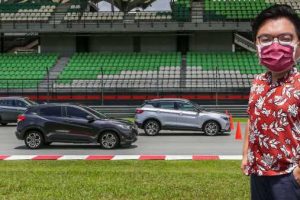 There has been a slew of new information regarding the Proton X50 during the exclusive media drive at the Sepang International Circuit yesterday. Among those announced is the Flagship 1.5 TGDi’s century sprint time of 7.9 seconds, which is respectable.

To test those claims, Proton pitted the X50 against the most popular B-segment SUV in Malaysia, the Honda HR-V. This is not the hybrid variant, so power comes from a 1.8 litre four-cylinder SOHC i-VTEC engine, offering 142 PS at 6,500 rpm and 172 Nm at 4,300 rpm. A CVT drives the front wheels.

As a bonus, the F48 BMW X1 sDrive18i was also part of the line-up, and is perhaps closer to the X50 in terms of powertrain. Motive power for the Bavarian is the B38 1.5 litre three-cylinder turbocharged engine, offering 140 PS and 220 Nm of torque. Drive is sent to the front wheels through a seven-speed Steptronic dual-clutch transmission, good for a 0-100 km/h sprint of 9.6 seconds.

So, with the X50 having the upper hand in terms of output figures (at least on paper), how will it stack up against the competition? With 177 PS and 255 Nm and a seven-speed wet DCT, is it the fastest kid on the block? The answer might surprise you, so have a watch, and let us know what you think, below.