Home » Car Reviews » DPF: what is a diesel particulate filter?

DPF: what is a diesel particulate filter? 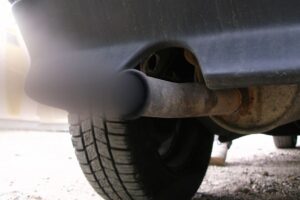 Diesel cars have been highly criticised for their harmful emissions over the years – their sales numbers have been declining for some time now, and emissions regulations are getting increasingly stricter.

Unlike innovations such as AdBlue – which has only been fitted to diesel cars since 2015 – Diesel Particulate Filters have been in use some time. For the most part, DPFs are something most drivers won’t notice as these components work in the background. However, many diesel owners first hear about DPFs if theirs gets blocked, triggering a warning light on a the car’s dashboard.

But what are DPFs, what do they do and what common problems can occur?

What is a DPF?

The DPF is part of a diesel engine’s exhaust system, and it is used to collect soot and other particles that are generated when the diesel fuel is burned inefficiently by the engine. These inefficiencies can happen because a diesel car is old or in need of a service, although diesel cars that do lots of short low-speed journeys where the engine doesn’t warm up enough can also be less efficient and generate more of these particulate emissions as a result.

The diesel particulate filter works in a similar way to a catalytic convertor. It operates by trapping the pollutants within it as the exhaust gases pass through. The most common material used in a DPF is the same as you’ll find in a cat, too. This material is called cordierite, it is a ceramic material that is efficient at absorbing soot and other deposits that are commonly found in diesel exhaust.

Cordierite is relatively inexpensive when compared to some of the other materials found in exhaust filtration systems, which means DPF replacement costs shouldn’t be too high. The clever part of a DPF is that it’s ‘self-cleaning’ and can regenerate to carry on cleaning your exhaust gases, which allows the part to last for longer.

When the time to replace does come around, a car’s electronics can detect when the DPF becomes filled with particulate matter and soot, and can set about forcing out clogged material when necessary. This usually happens when a car is being driven at speed, however some filters can also be unclogged with the car parked and the engine running at a higher idle speed.

Is my DPF blocked?

As with any car part, issues can arise over time or if you don’t take care of your DPF. The most common issue with a DPF is that it can get clogged, especially if you use a diesel car for frequent, short trips around town at low revs where its ‘self-cleaning’ system can’t work properly. The first sign you’ll usually get of a blocked Diesel Particulate Filter is with a dashboard warning light. If this illuminates, you should take your car to a service centre for inspection as soon as possible.

Diesel cars (and their DPFs) don’t cope well with intermittent, light use and are best suited to longer drives. It’s healthier for a diesel car to get one longer drive (for example, on the motorway) per month. To clean your DPF, get the car warmed up and give it some revs, then take it on a 20-minute drive on a faster road or dual carriageway/motorway where you can accelerate. If you see a puff of black soot exit from the exhaust, this can be alarming, but is actually a sign that the DPF has been unclogged. Your car will feel the benefit from the purge of soot immediately.

Is it illegal to remove my DPF?

Yes, it’s illegal to remove your Diesel Particulate Filter and you could get fined up to £1,000 (£2,500 for vans) for doing so. It can also void your insurance policy.

Some drivers seek to remove their DPFs to bypass any issues with the system, but a diesel car without a DPF will constantly belch smoke and other nasties into the air, and could fail its annual MoT test due to the increased level of pollutants that are no longer controlled by your car’s exhaust system. If you are buying a used diesel then be sure to check that its DPF is in good working order.

Admittedly, it’s hard for an MoT test station to detect whether a DPF has been removed. Unscrupulous owners can easily remove the DPF assembly, and some garages even offer a DPF removal service. These take out the filters and remount the empty housing, so it looks like the DPF is fitted as normal. As the MoT only requires a visual inspection that all emissions kit is present, the MoT tester would be none the wiser.

Don’t risk driving a car without its DPF fitted – it could cause all sorts of problems and damage not only the environment, but your bank account, too.

Have you had any problems with DPFs that we should know about? Let us know in the comments below…