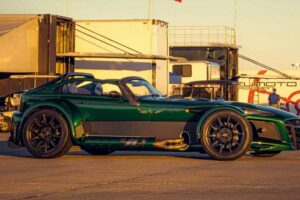 Donkervoort, the Dutch manufacturer of hand-built sports cars, finally arrives in the United States. Answering a growing demand from local customers, the automaker begins accepting orders for the D8 GTO Individual Series with the promise of “far bigger things to come with future models.” Even more importantly these days, despite the two-year waiting list in Europe, Donkervoort has a free production capacity that will meet the US demand with no delays.

The products of the Dutch company will be sold and serviced in the United States through its local partner Bespoke Imports Group. The D8 GTO Individual Series, which made its debut in September last year as the last hurrah for the D8 GTO family, wears a starting price of $240,000 and the very first example of the sports car will arrive shortly in Florida. In just a few weeks, two other Donkervoorts will be sent to Colorado and California.

“American supercar enthusiasts can’t wait for Donkervoort cars to arrive, and there is already a surprising amount of interest in the US,” Denis Donkervoort, managing director of the automaker, comments. “Inquiries from the US rank second behind only Europe, despite our supercars never being sold there, so we know enthusiasts in the United States are aware of what Donkervoort delivers.”

Powering the D8 GTO Individual Series is an Audi-sourced 2.5-liter inline-five turbocharged engine with more than 400 horsepower (294 kilowatts). Donkervoort promises the US specification of the model will sprint from 0 to 62 miles per hour (0-100 kilometers per hour) in just 2.7 seconds and hit 124 mph (200 kph) in 7.7 seconds. There’s no mention of the available transmissions, but in Europe, the D8 GTO Individual Series has a standard five-speed manual and an optional six-speed sequential gearbox.

The Individual Series is a highly customizable version of the sports car, which can be specified for either road or primarily track use. Some of the optional features include a Bosch ABS system with a tune specifically for tracks and a faster steering rack for quicker reactions. Donkervoort says that its American partner can deliver “the same ideas of extreme customer service and customization,” which hints at a wide portfolio of customization options for the US market.