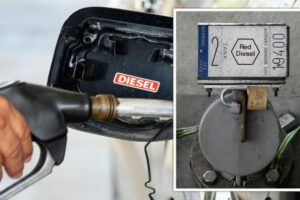 On Friday, April 1, rebated diesel, which is commonly referred to as red diesel, as well as rebated biofuels were restricted, meaning many industries which rely on the fuel would have to look for alternatives. Some organisations predicted that the law changes could lead to businesses facing additional fuel expenses of between £100,000 and £400,000 per year.

Fuel technology specialists SulNOx believes the Government needed to do more to protect drivers aside from a 5p cut to fuel duty, adding that the red diesel ban was a “contradiction”.

A spokesperson for SulNOx said: “The UK Government, in its policy statement on the imminent red diesel taxation, says that higher fuel prices encourage the take up of greener and cleaner vehicles and push users to improve efficiency or to use less fuel.

“From April 1, rebated diesel, more commonly known as red diesel, and rebated biofuels will no longer be allowed to be used which will result in increased cost of diesel by 55 percent, threatening the survival of half businesses in affected sectors including construction and mining.

“This will net the treasury around £500million.

“It is clear to see that we are not at a stage where construction plant vehicles for example can be electrified – the technology either just isn’t there or is nowhere near being viable if it is.”

Before the Spring Statement, fuel duty in the UK was 58p per litre but was cut by 53p per litre on petrol and diesel.

In comparison, only 11p is paid per litre of red diesel, meaning it is much cheaper for businesses to buy, especially in bulk.

Many companies said this move would completely change the way they operate, with reduced profits and greater expenses.

One Express.co.uk reader, CliveLondon, said: “I wonder how many of those upset by this actually use red diesel for what it is intended for, farm vehicles.

“Red diesel is abused so much then it is only right that it is got rid of.