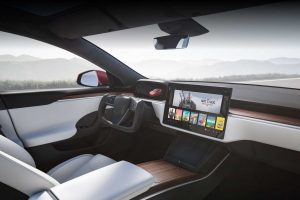 The new design certainly “suggests” autonomy, but that doesn’t mean it will be a reality in the near future.

The 2021 model year changes have added quite a few new features to Tesla’s high-end luxury sedan. Some of these changes hint at a future with less reliance on traditional driver controls. One of the most noticeable changes is the addition of a yoke steering wheel. Tesla has rid itself of the stalks behind the wheel, mapping a lot of the function to the wheel itself, and automating others, like your gear selection.

In addition, Tesla has also removed the stalks for the steering wheel area. Many of the functions have been moved to the sides of the wheel, similar to what you would see in a Ferrari. One function that was not transitioned however was the gear selector.

In Tesla’s futuristic vision to get rid of the steering wheel and develop a fully self-driving car, gear selection will now be handled by the car in a different manner. In the Tesla V11 leak, we can see the company has dubbed this system Smart Shift. “No more stalks. Car guesses drive direction based on what obstacles it sees, context & nav map. You can override on touchscreen,” noted CEO Elon Musk via Twitter.

As Musk stated, the new system will decide the correct gear based on multiple factors such as what the cameras see and your location. For instance, if you pull up to your home driveway the Tesla should be able to tell it’s in a driveway and the GPS should know you are at home. With this information, the car should know to put itself in Reverse when you get in in the morning and in Park when you pull up later in the afternoon.

In theory, Tesla could use your driving history alongside the rest of the fleet’s data to help determine the best gear to be in for your specific instance. With a neural net in place, any wrong decisions (with a required manual override) would correct themselves prior to the next attempt. Like Autopilot, the car will continuously learn and improve through Tesla Software Updates.

For those who wish to maintain full control of which gear they want to be in, there is an override option. The digital gear selector is located on the driver’s side of the center console. Rather than buttons, changing gears will be done on a swipe up/down motion on the silhouette of your car. There will also be an option to completely disable the automatic shifting, requiring you to solely rely on this method.

Some of these changes appear to hint at a driverless (or, at least, less driver- controlled) future ahead. Perhaps some of the design decisions Tesla is implementing are a window into a future completely handled by Autopilot and FSD. In turn, you would only take over the steering wheel for spirited drives that require two hands.

Moving on to the Smart Shift. The personal energy required to flick a stalk to change gears is minimal. It’s such a non-action that I bet most of us don’t even register the moment of switching gears — it takes virtually no time and no energy.  So what’s going on here?

I understand that if Tesla intends to deliver a fully autonomous car then it will have to deliver a car that can shift gears on its own as well. That said, some of these changes to the new Model S interior might just be our first look at what’s coming via a self-driving future.