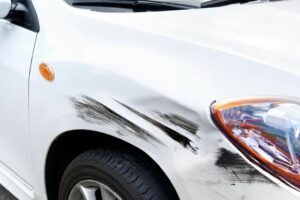 Rip Off Britain: Driver discovers previous damage to her car

The dealers, based in Warrington, admitted lying to customers in order to get them to buy second-hand cars that were advertised as ‘excellent condition’ when in fact they needed repairs.

Five complaints had been made to the Trading Standards team at the local council about their company Prestige and Performance Motors Ltd.

The complaints were from customers who had serious concerns about their vehicles after purchase.

It was also claimed that Myler attempted to convince one customer that his car was sold through a private sale and not as part of Prestige and Performance, reported Car Dealer magazine.

The complainants told the court they had not received satisfactory responses to their queries from the dealership.

After hearing all the evidence, the district judge ordered £2,900 to be paid to the victims by way of compensation.

Rather than any separate fines, an 18-month conditional discharge was also handed down.

Myler was also ordered to pay prosecution costs of £5,500 and Cansfield £2,500, plus a victim surcharge levy of £22 per offence.

“Buying a second-hand car is a large expense and a big commitment so consumers have the right to know they’re not being misled.

“We are pleased to have another successful outcome in court and the consumers involved have been able to recoup some of their costs after their experience with Prestige and Performance Motors Ltd.”

The verdict comes as many dealers around the UK are under the spotlight for selling cars that have previously been in accidents.

Cars that have often been involved in major accidents are not being categorised correctly and then patched up and sold on at dodgy dealers for profit.

Thousands of the cars were uncovered recently by the BBC after an investigation on ‘Rip-off Britain’.

The issue is occurring when rather than being handed one of the correct categorisations after damage has been reported, such as Cat N or Cat S, the cars are simply sold on without labelling.

This makes it incredibly difficult to track a car’s history, in addition to making money for insurance companies and then dealers who buy cheap and sell at a higher price.

Ian Ferguson specialises in resolving disputes between buyers who want to reject their cars and the dealers that sold them.

He said: “Usually, there are a number of reasons for a car not being given a category. One is that the engineer to assess the car at the beginning was not qualified to make the decision and that is sadly very often the case.

“The other motivator is money – when a car is classified its value depletes dramatically.

“So anything from 50 to 90 percent of its value may be wiped off depending on the categorisation.