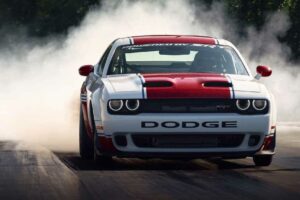 Dodge fans take note: the performance brand is promising product news every four months for the next two years, leading up to the first electric vehicle to wear the badge. Never Lift is the name of a new business plan described as a 24-month road map to Dodge’s performance future. That takes us to the eve of 2024, which is when Dodge will introduce its first pure electric car. Every indication is the EV will live up to the brand name and go like a bat out of hell.

Dodge Brand CEO Tim Kuniskis has said motors and batteries are the natural evolution of the brand because the tech will take powerful cars and amplify them.

And for students of the brand, Dodge’s electric muscle car is expected to bring back the fratzog logo, a red triangular, somewhat menacing symbol dusted off from the past. Teaser videos have shown the 1960s-era logo on a vehicle with a full-width ’60s-style grille. As for the word fratzog, it seems to be completely made up; an interesting name for a new logo. It is a fitting name to bring back as it harkened an era that was looking to define its future.

When Fiat Chrysler Automobiles merged with PSA Group to become Stellantis, an automaker with 14 brands to wrangle, the speculation was rampant that the Dodge and Chrysler brands were endangered species. But Stellantis CEO Carlos Tavares said every brand must prepare a business plan to show its long-term viability.

Dodge has been reduced to the Dodge Challenger and Dodge Charger muscle cars and the masculine Dodge Durango SUV. Every time their performance increases with a new variant or package, the vehicles gain market share, despite their age. It is unclear if the EV replaces one of the cars or is an addition to the lineup.

To build excitement over the next two years until the EV arrives, the Never Lift plan calls for a piece of news every quarter and a number of marketing moves, including an ambassador for the brand, car giveaways, dealer initiatives, and the return of Direct Connection performance parts.

Direct Connection is Back

Dodge is bringing back the Direct Connection performance parts brand—launched in 1974—and now available from Power Brokers dealerships.

“Dodge is a pure performance brand, and the reintroduction of Direct Connection will empower members of the brotherhood looking for increased performance without violating emission requirements or the factory warranty,” said Kuniskis in a release. “We’re doubling down on our commitment to Direct Connection by pairing it with our new Dodge Power Brokers program, so when customers want to unlock the true horsepower potential of their Dodge muscle car, they can connect with a network of dealerships as their trusted resource.”

In addition to factory-tuned parts, there will be Direct Connection “tuner” and “stage” kits so owners can legally tweak their vehicles, unlocking almost 100 horsepower from the first set of kits—with more to come. Performance kits will upgrade the engine, suspension, and driveline of the current Challenger. Direct Connection will also offer race-ready parts for the Dodge Challenger Mopar Drag Pak, including a body-in-white to build your own Drag Pak. Direct Connection parts will be available starting Dec. 15.

And You Get a Car

Dodge is tapping 25 car enthusiasts who are famous in the sports, music, and entertainment worlds and offering them a Dodge of their choosing. Operation 25/8 (so-named for the “Brotherhood of Muscle” that goes above and beyond the normal 24 hours a day, seven days a week, hence 25 and 8) will give the cars away over eight weeks. We are promised more details on Nov. 12.

Dodge is looking for an ambassador that embodies the scrappy spirit of the original Dodge brothers. The job comes with a $150,000 salary, a Hellcat, wardrobe (we suspect no ties involved), and a business card with the title “Chief Donut Maker.”