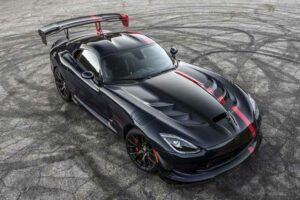 After discovering Toyota somehow managed to sell a brand-new FJ Cruiser last year in the United States, we’ve now stumbled upon other zombie cars. This time, we’re talking about Dodge and a couple of its models that were phased out many moons ago. Once again, the Viper is back from the dead as four were sold in 2021. We’ve reported about two of them when Stellantis published the Q1 sales chart, but to our surprise, another two were sold in Q4.

Ironically, sales of the Viper are flat year over the year as Dodge sold four of them in 2020. We’re wondering how many are still left in stock considering production ended at the Conner Avenue Assembly Plant in Detroit, Michigan way back in August 2017. We’ve been reporting on the supercar’s refusal to die for several years, and you can rest assured we will continue to analyze the sales charts in 2022 during each quarter.

And now for something considerably more mundane. The Dart has generated a total of 10 sales last year, up by 43 percent compared to 2020. Half of them were sold in the last quarter, which is quite a bit puzzling since the compact sedan is even older than the Viper. Dodge built the last one in September 2016 at the Belvidere Assembly Plant in Illinois. Seven units were sold in 2020 and another 15 in the year before.

The mechanically related Chrysler 200 also shows up in Stellantis’ 2021 sales report with 15 units or 67 percent more than the year before. Even though production at the Sterling Heights Assembly plant in Michigan ended in December 2016, the econobox still appears in the latest sales chart. Speaking of Chrysler, the Town & Country racked up four sales last year, despite leaving the assembly line at the Windsor Assembly Plant in, Ontario, Canada in 2016.

The last ancient vehicle from Stellantis stubbornly sticking around is the Jeep Patriot. The compact crossover was killed in December 2016 when the last one was built at the Belvidere Assembly Plant. Nevertheless, no fewer than 16 units were sold in 2021, up by a whopping 433 percent compared to the year before.