Dodge Hellcat Finale To Have 909 Horsepower On E85 Fuel: Report 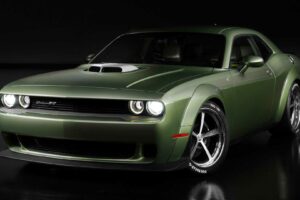 The days of the supercharged Hellcat V8 engines are almost over and Dodge knows that. The supercharger whine will soon be replaced with EV whine, though, at least for Dodge, this won’t happen until one final version of the mighty Challenger is unveiled. We don’t expect to see it this year, but once it hits the showrooms, it will likely become the most powerful factory Challenger in history.

A report from earlier this month speculated the 6.2-liter V8 under the hood of the Challenger will receive significant tweaks and will be modified to run on E85 fuel. When we asked Dodge, the automaker didn’t comment on the topic but now there’s a new report that claims the peak output of the supercharged Hellcat mill will be 909 horsepower (669 kilowatts).

Mopar Insiders recently spoke to a “reliable source” with knowledge on the matter who wasn’t ready to reveal the actual output but told the publication “it’s not four figures.” An editor then guessed 909 horsepower (669 kW) to which the source replied with “bingo.” Of course, nothing can be confirmed at this point, but this is a good indication of how powerful the final Dodge Challenger could be.

There were earlier rumors suggesting Dodge could actually boost the 6.2-liter engine to hit the magic 1,000 hp (735 kW) number, though, at least for now, it seems that won’t be the case. Whether the information from weeks ago was purely speculation or the engineers of the automaker were given a new target, it’s difficult to tell. One good theory is that Dodge probably wants to stay away from the output figures of the 7.0-liter Hellephant V8 crate engine.

If this new information turns out to be true, the final iteration of the Dodge Challenger could easily become the most powerful production model of the brand in its entire history. There’s no word regarding the expected torque, but keep in mind the Demon peaked at 770 pound-feet (1,044 Newton-meters) when running on 100-octane juice. Adapting the engine to run on 85 percent ethanol could unleash even more pulling power.