Discover How The Original Porsche 924 Wasn’t Actually A Porsche 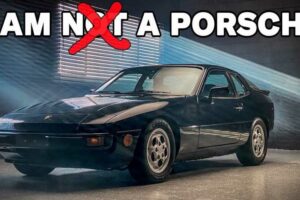 They don’t always start out as Porsches.

The Porsche 924 is an underappreciated hero of the Porsche brand. What started out as a consulting job for Volkswagen turned into a line of front-engine cars that saved the Porsche brand from bankruptcy. Sure the Porsche 924 was a parts bin special of Volkswagen parts, but Porsche was able to transform this interesting combination into a world-beating chassis revered by journalists around the globe.

In the early days, Porsche didn’t have a huge amount of money. Sure it sold the 911 sportscar, but the German brand had a hard time keeping its finances in order. To make additional money Porsche took on different consulting jobs to help grow the brand and keep the lights on. One such job was for Volkswagen to help them develop a front-engine sports car based on the Volkswagen parts bin to keep costs down.

The result was a front-engine transaxle sports car built with an engine from a VW Van, suspension from a VW beetle, and a transmission from a VW sedan. After finally developing the car which was ready for sale VW canceled the project due to the economic climate.

Porsche decided to keep the project going with production taking place at the Audi plant and the Porsche 924 was born. The first iteration of the Porsche 924 needed some work but showed promise. Porsche slowly developed this 924 platform revising the suspension and brakes and eventually adding a turbo to the weak Audi engine. After a while, Porsche developed an entirely new engine and body creating the Porsche 944 which saw strong sales and received accolades from magazines.

The Porsche 924 was not a real Porsche went it debuted, but after years of constant engineering development, it retired as a true Porsche great. The 924 kept Porsche in business and created some fantastic front-engine cars.