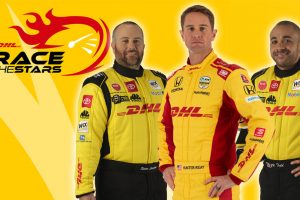 If you’re at a loose end this weekend, and you’re resident in the USA, you could fire up Forza Motorsport 7, have a quick race against Indy 500 winner Ryan Hunter-Reay, and walk off with a brand new gaming chair.

The DHL Race the Stars Forza Tournament runs throughout this weekend, and will see 36 qualifying drivers race against some big names in US motorsport. Alongside the 2014 Indy 500 winner — and 2012 IndyCar champion — Hunter-Reay, gamers will get to race two drag racing stars. 2018 NHRA Funny Car World Champion J.R. Todd, and Shawn Langdon, the 2013 NHRA Top Fuel Champion, will pit their wits against the best the gaming community can offer.

It’s a free-to-enter event, with players only required to register ahead of the qualifiers on Saturday March 20. The event will be hosted by ESL Gaming, so you’ll need both an ESL account and a FM7 game ID, for either Xbox One or Windows 10 PC, in addition to being a US resident and aged 18 or more.

Once registered, you’ll need to be one of the first 200 players to check in ahead of each of the three separate qualifying tournaments: one each for Hunter-Reay, Todd, and Langdon. There’s then three hour-long qualifying sessions for each, which will lead to the top 12 in each tournament qualifying for the final event.

Each of the three finals takes place on Sunday March 21, and it’s here where the stars get involved. You’ll be racing against your pro in a race in the 2011 Mercedes-Benz #35 Black Falcon SLS AMG GT3, and the fastest player in each final will take home the grand prize. In each case, that’s a die-cast model of the relevant star’s race car, a virtual meet-and-greet with them, and an unspecified gaming chair worth around $500.

At present only around 80 players have registered for the event so far, so with 200 spots available in each qualifier on Saturday there’s plenty of room left if you fancy trying your hand. You can register for all three events on the official website, and the first qualifiers begin at 1500 EDT.

Think your gaming skills are on point? Register for the #DHLRacetheStars @ForzaMotorsport tournament hosted by @ESL to race me & my @DHL_Motorsports teammates @JRTodd373 and @ShawnLangdon333.