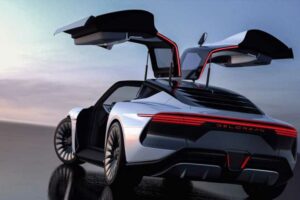 A little while back, DeLorean Motor Company released a teaser shot of its upcoming EV sedan, and you might have been wondering exactly what year it was, exactly, when you read that news. The DeLorean run by John Z. is long gone, but the new DMC is its successor company based in Texas, having bought a massive amount of parts and the rights to the name when the original folded. This outfit, led by Stephen Wynne, is the brains behind the Alpha5, a sleek EV sedan penned by ItalDesign—whose founder, Giorgetto Giugiaro, created the origami form of the original DMC-12.

The Alpha5 represents a split of sorts of this DMC entity, with a classic division run by Wynne and the new EV company headed by Karma alums Joost de Vries and Troy Beetz, called DeLorean Reimagined LLC.

Details of the Alpha5 are sparse, but its massive Gullwing doors recall those of the Tesla Model X, providing a huge portal to the four-place interior, which has a clean look that very reminiscent of that other American EV company—no yoke, however, to be seen. Ambitious numbers are paired to the speculative renders of this future vehicle, including a range exceeding 300 miles from a 100+ kWh battery, and a 2.99-second sprint to 60 mph. There had to be a nod to “Back to the Future” in there somewhere, so there’s also an estimated run from 0-88 mph, which should take 4.35 seconds.

Otherwise, we’ll have to wait until the Pebble Beach Concours d’Elegance to learn more (possibly) and see a physical incarnation of this neo-DeLorean in the (apparently not brushed stainless steel) metal.