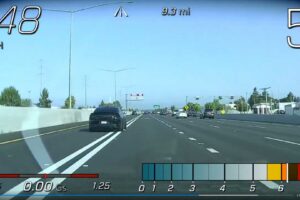 Originally introduced with the 2015 Chevrolet Corvette C7 Stingray, the Performance Data Recorder wasn’t developed to catch dealer technicians racing customer cars on public roads. However, the PDR proved to be extremely useful for Michael who caught Fremont Chevrolet’s tech red-handed, navigating through busy traffic at speeds of up to 148 mph while chasing a Dodge Charger.

As we reported at the beginning of the month, the 2021 Corvette’s owner reviewed the footage captured by the car’s PDR after taking his C8 to the service shop to investigate a noise in the engine bay. Having seen the somewhat shocking footage, Michael decided to get in touch with the dealership and explain his predicament.

Thankfully, the story has a happy ending as The Drive reports the dealer has agreed to take the customer’s 2021 car in exchange for a shiny new 2022MY ‘Vette. Not only that, but Fremont Chevrolet even paid the sales tax and the car is going to come fitted with the extras his original C8 lacked, even though he ordered them. These include a certain type of seats and the front suspension lift system, which for the new model year costs an extra $500, at $2,260.

Much like his original C8 was ordered with the extended warranty, it’s also included with the new car. It costs $2,238 and extends the interval to 60 months or 60,000 miles, whichever comes first. Until the 2022 Corvette arrives, Michael will be driving his current mid-engined sports car that has had a troubled early life.

It’s refreshing to see the dealership took full responsibility for the employee’s mishap and that Fremont Chevrolet has agreed to make things right for the customer. As to what will happen to the 2021 Corvette, dealership owner Inder Dosanjh told The Drive he will either keep it since he’s a Corvette collector or wholesale it.